Dozens of girls may have been trafficked to U.S. to marry 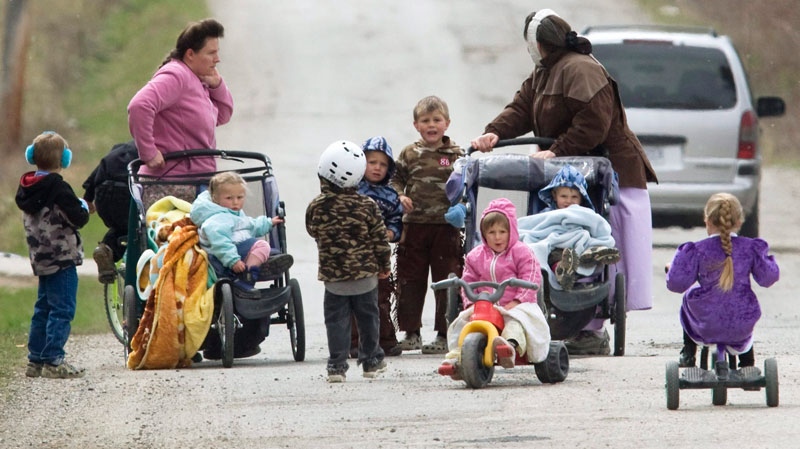 Members of the polygamous community of Bountiful, B.C. walk down a road near Creston, B.C. Monday, April 21, 2008. (Jonathan Hayward / THE CANADIAN PRESS)

Mounties are investigating allegations that more than 30 underage girls from B.C. were trafficked to the U.S. to enter polygamous marriages.

In an investigation that began in February, police are looking into evidence that girls between the ages of 12 and 17 were taken from the community of Bountiful to marry American men belonging to the Fundamentalist Church of Jesus Christ of Latter-Day Saints.

Cpl. Dan Moskaluk says the allegations date from the late 90s until early 2006.

"RCMP investigators are not aware of any more recent or any ongoing incidents were young girls are currently being victimized. The investigation is advancing and the RCMP anticipates sending investigators state side to Texas in the future," Moskaluk said in a release Thursday.

Police from B.C. are working with state agencies in Texas to complete the investigation, which also includes allegations that American girls were trafficked into Canada.

The RCMP has investigated Bountiful several times during the past two decades, looking into allegations of polygamy, sexual abuse and human trafficking, but those investigations have never led to criminal trials or convictions.

At least three girls from Bountiful-- two 12-year-olds and a 13-year-old -- were taken to the U.S. by their parents and married to FLDS leader Warren Jeffs, according to church records presented in court.

The church's traditional headquarters is along the Utah-Arizona border, but in 2004 it established a compound in Texas, which was raided by state authorities in 2008.

Jeffs was sentenced to life in prison on Tuesday for sexually assaulting an underage girl he took as his wife in a "spiritual marriage."

With files from The Canadian Press and The Associated Press