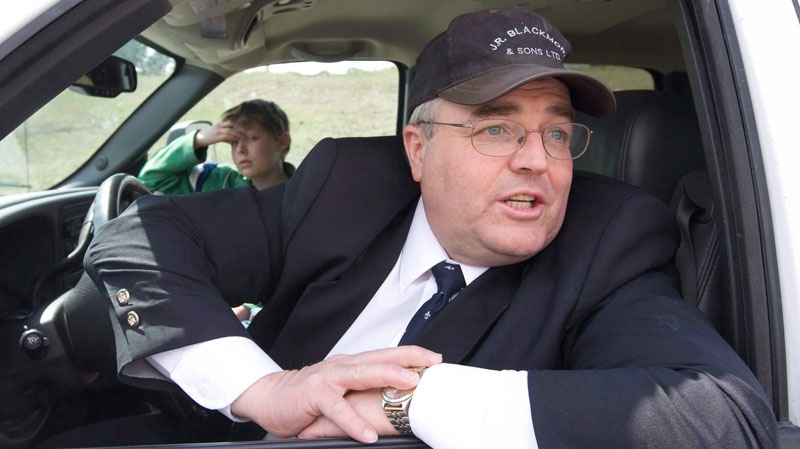 Winston Blackmore, the religious leader of the polygamous community of Bountiful, speaks to a reporter on April 20, 2008 at Bountiful near Creston, B.C. (Jonathan Hayward / THE CANADIAN PRESS)

One of the leaders of a polygamous B.C. sect who insisted he was personally disturbed by allegations that young girls from his community were taken to the United States to marry older men has been linked in court documents to more than half a dozen cross-border marriages involving children.

In at least one case, Winston Blackmore is listed in the documents as the husband of a child bride. In two others, he is alleged to have taken his own daughters across the border to be wed.

A B.C. judge is examining the constitutionality of Canada's polygamy laws, and the case has already heard of 13 cases in which girls from Blackmore's community of Bountiful, B.C., were taken to the U.S. to marry American men between 2004 and 2006. A 14th marriage also included in that list involved an American girl allegedly married to Bountiful's other leader, James Oler.

Those cases all appeared to involve Oler's side of the divided community. Bountiful has been bitterly split for nearly a decade, with half the community following Oler and the other half aligned with Blackmore.

But an affidavit filed with the court Thursday, prepared by a Texas Ranger who examined documents seized from a sister polygamous commune in the U.S., implicates Blackmore in several marriages between 1990 and 2004.

Nick Hanna was asked by B.C. government lawyers to search for marriages that "likely involve Canadians."

His affidavit lists a total of 17 additional marriages -- 14 performed in the U.S. and three in Canada. Hanna does not specify in each case whether the child brides or husbands were Canadian, nor does he list the girls' ages, but he does identify each as a "child."

The affidavit says church records indicate Blackmore was married in Sandy, Utah, on Feb. 20, 1999, to a girl only identified as Child U.

In three other marriages -- two in the U.S. and one in Canada -- Blackmore is listed in church records as a witness.

The court has already heard testimony from one of Blackmore's former wives, Ruth Lane, an American woman who was married to him when she was 15. Lane's younger sister was also married to Blackmore a short time later, Lane told the court. It's not clear whether either of those marriages are among those listed in the affidavit.

In February, when the court first heard allegations of cross-border marriages involving Bountiful girls as young as 12, the RCMP announced a criminal investigation.

At the time, Blackmore attempted to distance himself from the allegations.

"If they're investigating the story we read about, I think they should look into it and see what's happening there," Blackmore told The Canadian Press. "If that is a fact, I'm really disturbed about that myself."

A request for comment sent to Blackmore via email wasn't immediately returned Thursday.

The first set of alleged cross-border marriages involved two 12-year-olds and a 13-year-old who were married to polygamist leader Warren Jeffs, the self-described prophet of the Fundamentalist Church of Jesus Christ of Latter Day Saints, or FLDS, to which most residents of Bountiful belong.

Jeffs is now in a Texas jail awaiting trial on charges of sexual assault and bigamy related to allegations he had sex with two children, one under 14 and the other under 17.

Blackmore and Oler were each charged in 2009 with practising polygamy, but the charges were later thrown out of court, prompting the B.C. reference case.

The trafficking of young girls is among a long list of harms the provincial and federal governments say is inherently caused by polygamy. The governments also say polygamy subjugates women, creates to child brides and teenage pregnancies, leads to sexual and physical abuse, limits the education of children, and forces boys and young men to be cast out of polygamous communities.

Reimer said the international bodies involved have consistently said the treaties require polygamy to be banned.

"Those treaty bodies have called for polygamy to be, in their words, 'definitely abolished wherever it continues to exist,' and have urged that it be discouraged and prohibited," Reimer said during his closing arguments.

"There's a strong consensus under international human rights law that states are obligated to take all appropriate measures to eliminate forms of discrimination, including polygamy, against women."