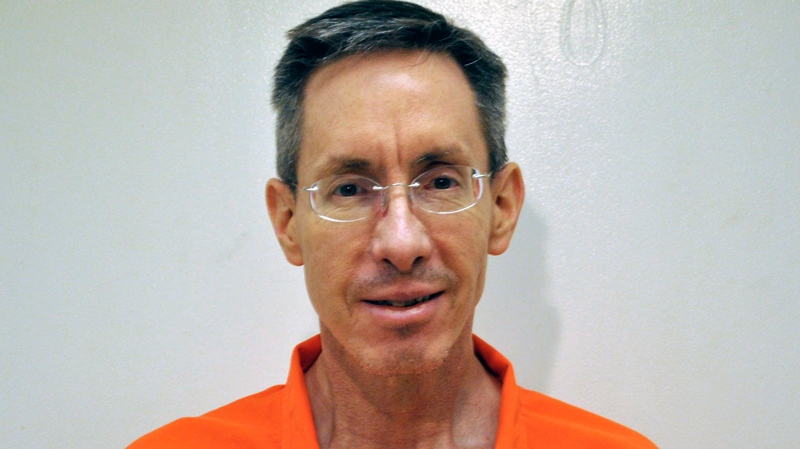 In late 2005, the now-jailed polygamist leader Warren Jeffs called two men in Bountiful, B.C., and told them to bring their 12-year-old daughters to the United States to be wed, according to passages from Jeffs' diaries presented in a B.C. court Tuesday.

Jeffs, who was in his late 40s or early 50s at the time and already married to dozens of women, told the men the girls would become his new wives.

In the diaries, Jeffs describes one of the fathers as "thrilled" with the news and he goes on to describe the marriages themselves, in which he and the girls were "sealed for time and eternity."

"I then called in these two young ladies. I explained to all that these girls were to be sealed to me to protect them at a time when they were able to be sealed and that I had their fathers' permission and the Lord's direction," Jeffs said in the written dictations, portions of which were read in court during closing arguments at a landmark case about Canada's polygamy law.

"We felt a powerful spirit of peace and more especially the second one, the younger one, received the burning witness of burning peace. All present received that peace."

In an unrelated diary entry, Jeffs explained his reasons for marrying children.

"These young girls have been given to me to be taught and trained how to come into the presence of God and help redeem Zion from their youngest years before they go through teenage doubting and fears and boy troubles," wrote Jeffs.

"I will just be their boy troubles and guide them right."

Jeffs, 55, is the self-described prophet of the Fundamentalist Church of Jesus Christ of Latter Day Saints, or FLDS. He is in a Texas jail awaiting trial on charges of sexual assault and bigamy, related to allegations he had sex with two children, one under 14 and the other under 17.

In the diaries, which were seized in a raid by Texas authorities on the FLDS's Yearning for Zion ranch in 2008, Jeffs recounted phoning the fathers of the two 12-year-olds. He told them to bring their daughters to the FLDS cities of Hildale, Utah, and Colorado City, Ariz., which together are known as Short Creek.

Jeffs said God told him how to get the girls into the U.S. undetected, telling the fathers to bring their daughters to an FLDS member's house in the Short Creek area and keep them hidden inside.

He later described a plan to move the girls from Short Creek to the ranch, located near Eldorado, Texas, using a trailer with a bathroom so the girls could stay inside without having to "go to gentile places to use restroom."

The girls were among more than two dozen teenagers from the polygamous community of Bountiful that B.C. government lawyers allege were moved to the U.S. to marry much older men.

Government lawyers are presenting documents seized during the Texas raid as evidence that young girls were trafficking between FLDS communities in Canada and the U.S. to marry -- which they say is one of many inevitable abuses that justify keeping polygamy illegal. The B.C. government noted in its closing submissions that it has already submitted evidence 13 girls from Bountiful between the ages of 12 and 18 were married to older American men from 2004 to 2006.

On Tuesday, B.C. government lawyer Leah Greathead said Texas officials had sent information about more than a dozen additional cases, and asked for permission to table the documents as new evidence. The judge will decide later whether to admit the new evidence.

Craig Jones, another government lawyer, told the judge it's impossible that residents of Bountiful weren't aware that girls as young as 12 were being taken to the U.S. to be married off. And no one, he noted, called the police.

"Children are simply disappearing from the community -- 12-year-olds girls, 13-year-old girls, 15, 16, 17 -- and all this is happening with the regularity that the evidence indicates," he said.

"It's unfathomable to think that this practice was not widely known in the community."

Among the girls from Bountiful allegedly married to American men were two teenaged sisters of James Oler, one of two competing bishops within Bountiful, who were also married to Jeffs. Another was Oler's 15-year-old daughter, who was married to another man the same day Oler himself married a 15-year-old American girl, the government alleges.

The province launched the constitutional reference case after the failed prosecution in 2009 of Bountiful's two leaders. Winston Blackmore and James Oler were each charged with one count of practising polygamy, but those charges were later thrown out.

Jeffs is awaiting trial in Texas and could also face trial in Utah, where prosecutors are considering whether to retry him on charges of rape as an accomplice for his role in the 2001 marriage of a 14-year-old follower to her 19-year-old cousin. He was found guilty in 2007, but the state's Supreme Court overturned that conviction last year.

On Monday, a church elder, William E. Jessop, filed papers with the Utah Department of Commerce to take over as president of the FLDS.

Jessop said he wasn't taking over the church, but rather fulfilling of an earlier directive from Jeffs.