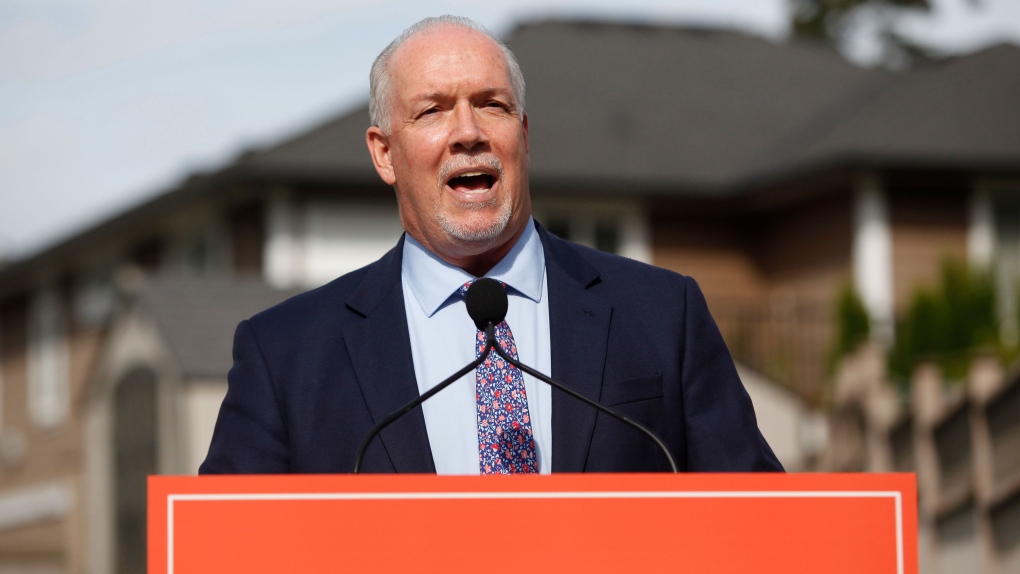 Premier John Horgan announces there will be a fall election as he speaks during a press conference in Langford, B.C., on Monday September 21, 2020. THE CANADIAN PRESS/Chad Hipolito

With the provincial election less than a week away, Democracy Watch co-founder Duff Conacher said he's not interested in stopping the vote or invalidating the results – only in preventing a future premier from doing the same thing.

"Premier Horgan, by calling this snap election, acted like an old dictator, not a New Democrat," Conacher told CTV News. "Snap elections are unfair to other parties and to candidates and voters."

Democracy Watch's petition is being handled by Hoskin and Harcourt LLP, but Conacher said it's still being drafted and won't be filed until later this week at the earliest.

The organization intends to argue the election call violated B.C.'s Constitutional Amendment Act of 2001, which set fixed election dates in the province to prevent political interference.

Conacher said without fixed dates, the temptation for politicians to capitalize on their popularity or any other beneficial circumstances would be too great.

"That's why B.C. fixed election dates in 2001 – or so everybody thought – and why every province except Nova Scotia has followed, and the federal level has followed as well," he said.

Democracy Watch filed a similar challenge against the snap election called by then-prime minister Stephen Harper in 2008, but ultimately lost based on the wording of the federal fixed election date law that Harper's own government had passed.

"The courts ruled that the rule was too vague, not strong enough to stop the prime minister from calling an election," Conacher said. "But that was the federal courts. The B.C. court may rule something different and may say that it was illegal."

Of course, the circumstances surrounding B.C.'s 2020 provincial election and the 2009 federal election are vastly different. Horgan has stressed the immense challenges posed by the COVID-19 pandemic as justification for sending voters back to the polls for a fresh mandate.

Asked about Democracy Watch's planned lawsuit on Monday, the BC NDP also argued that Horgan acted in line with the province's Constitution Act.

While there are no penalties set out under B.C.'s Constitutional Amendment Act, meaning there would be no repercussions for Horgan even if the court were to rule in Democracy Watch's favour, Conacher said there's still value in seeing these kinds of cases through.

"When a premier or any politician does something illegal, we like to go to court and have the courts issue a ruling that they violated the law because it's just part of basic public accountability that you should be following the law," he said.

"There are no penalties, but at least having the court declare it as an illegal election call will stop it from happening again."