A Nanaimo woman who has experience as a first responder says Mounties mishandled a wellness check on her in May, when she was allegedly punched in the face and placed in a spit hood that made it difficult to breathe.

Video from her home security system shows officers carrying her out of her home to a police car, and pictures show her face bloody and bruised as five Nanaimo RCMP officers detained her — something that Shanna Blanchard says never should have happened.

“I was suffocating. I told them I couldn’t breath again and again,” Blanchard told CTV News. “The officer said, ‘If you’re speaking, you’re breathing.’”

Blanchard, who is a former firefighter and a personal trainer, said news about six other cases across Canada, where wellness checks by police have turned fatal, prompted her to speak out in the hopes police can take a back seat to mental health professionals in calls like these.

“If this helps shed light on the way wellness checks are performed in B.C., let alone in Canada, then I know I have to come forward and speak,” she said.

Her case is being investigated by B.C.’s Independent Investigation Office, which handles cases of death or serious harm at the hands of the police. Nanaimo RCMP said it would not speak to the incident while the investigation is ongoing.

The first public report of the IIO describes the incident, on May 26 at about 2:20 pm, as a “call from an individual concerned about the safety and wellness of an affected person.”

“A physical altercation ensued. The woman was transported to hospital. Several days later police learned that the woman had suffered serious injuries and the IIO was notified,” the report reads.

Blanchard said she was struggling with depression and was having a discussion with her son that was difficult for her. She said she locked herself in the bathroom, crying. One of her family members called 911 in the hopes they could get medical assistance.

Five RCMP officers came first, which worried Blanchard. She said she refused to come out, saying she wanted to wait for paramedics.

“I eventually realized I was at a standoff and they wouldn’t leave unless I came out…one officer said I was being apprehended under the Mental Health Act. I stood up quickly and said, ‘No, you can’t.’ He punched me so hard my entire head spun 360 degrees,” she said.

“I landed with my mouth open in a pool of blood. I broke both of my front teeth,” she said. Officers put her in a spit hood, which is meant to stop people from spitting. But she said it was put on incorrectly, which meant that she was breathing in her own blood. 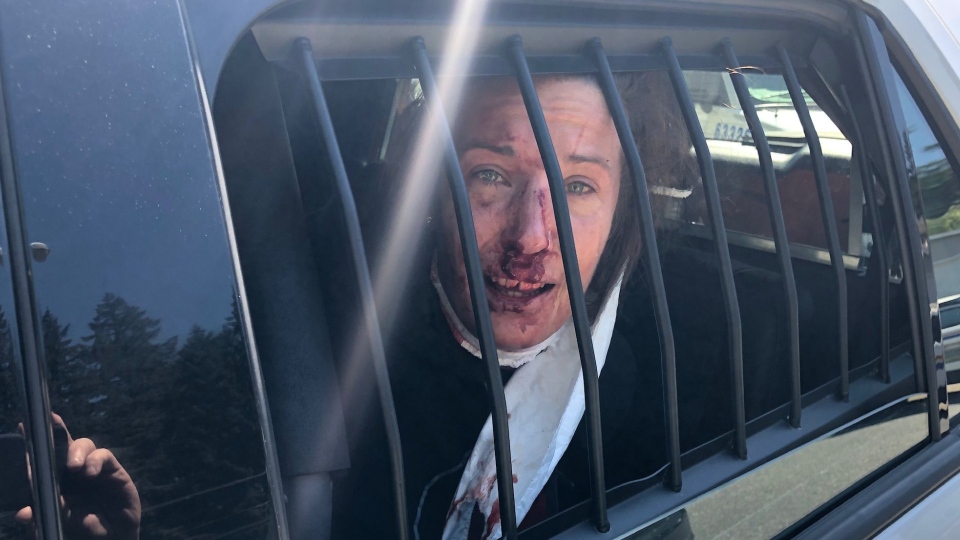 She said she was able to stretch a finger to pull the mask away. She said there was no reason not to wait until Emergency Health Services arrived, and no grounds to apprehend her.

“I was assessed by the psych nurse in hospital and released. I was home by 5:15 p.m. There was no need for this,” she said.

Blanchard said her case is an example of why police need to have a different system to respond. She suggested a two-stage system where if there is a weapon or a danger, police are sent as usual.

But if there’s no weapon or danger, there should be a protocol to send a nurse or a mental health professional.

“I was hurting. I needed community support. I needed mental health support. I certainly didn’t need the RCMP,” she said.