Rainfall warning issued for parts of B.C.'s Lower Mainland with another 'atmospheric river' on the way 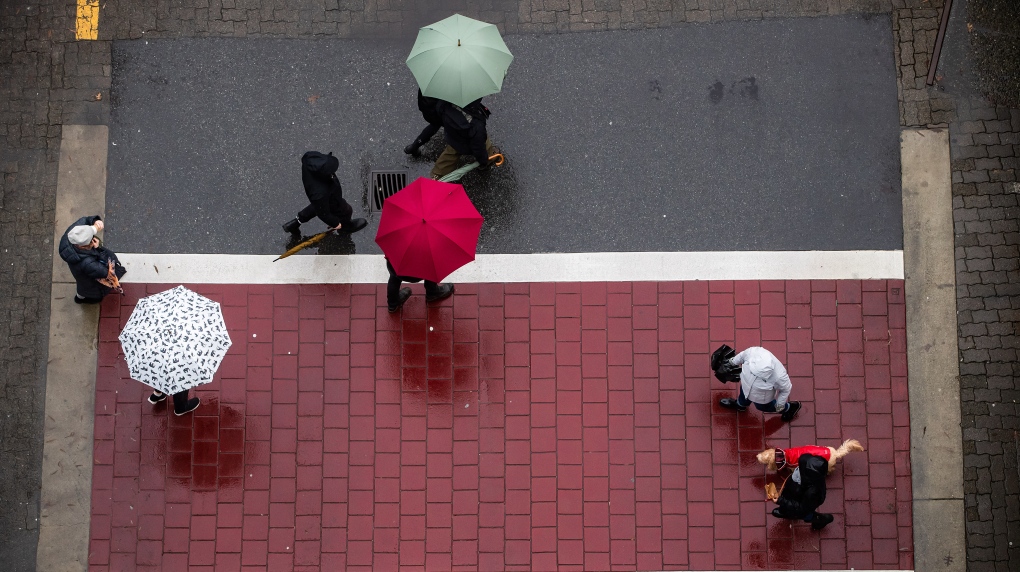 People walk a dog wearing a raincoat as others carry umbrellas while rain falls, in Vancouver, on Sunday, December 27, 2020. THE CANADIAN PRESS/Darryl Dyck
Vancouver -

Extreme weather is continuing in southwestern B.C. as another warning has been issued for parts of the Lower Mainland.

Environment Canada says another "atmospheric river" is heading to the region and with it, a lot of wet weather through Thursday. The Fraser Valley including Chilliwack, Hope and Abbotsford are expected to be hit the hardest and could see as much as 70 millimetres of rain.

"A moisture-laden system with an atmospheric river pattern will bring heavy rain to the Fraser Valley starting tonight and continuing on Thursday," Environment Canada's warning says, adding that the system will then move towards B.C.'s Interior.

"Heavy downpours can cause flash floods and water pooling on roads. Localized flooding in low-lying areas is possible."

Other parts of the Lower Mainland, including the North Shore, Coquitlam, Surrey, Maple Ridge and Langley, are expected to see heavy rain, though not enough to warrant a full warning. A statement from Environment Canada says those areas could see nearly 50 millimetres of rain.

Downpours are expected to be heaviest late overnight and through Thursday afternoon.

The latest weather warning comes just over a week after the region's most recent "atmospheric river." From Oct. 15 to 17, just over 80 millimetres of rain accumulated in Vancouver.

Then, just days later, meteorologists warned of a weather event they called a "bomb cyclone," which brought strong winds that led to ferry cancellations and power outages for thousands.

Meanwhile, drivers travelling between the Lower Mainland and the Interior are being advised as much as 20 centimetres of snow could accumulate on Highway 5 Wednesday, specifically near the Coquihalla Summit.