The video is startling. A man stands at the helm of a small speedboat loaded onto a trailer on a boat ramp, when suddenly, the SUV holding the trailer begins to roll backwards.

In less than five seconds, the man races to the bow, leaps off, and tries to roll away as the SUV's rear wheel and the open driver-side door both barrel toward him.

Some 24 hours later, Amir Hashemi is suffering from scrapes on his arms and legs, and terrible knee pain, but no broken bones.

When I show him the video, recorded by a witness at the Port Moody Rocky Point boat ramp for the first time, he has one word: "Wow."

"What do you think when you see this?" I ask Hashemi.

Hashemi, who works in construction, says he was out for a day of boating. He’s been doing it for three or four years, and never had any trouble.

Port Moody Police and witnesses say it appears Hashemi was towing the boat out of the water just before 5 p.m. Wednesday when its propeller scraped the ground. So he got back in the boat in order to raise it.

Hashemi says he didn’t have time to think.

Both the Mitsubishi Outlander hybrid SUV and the speedboat ended up in the water, with the SUV almost completely submerged.

Josh Bishop, who recorded the video and raced to help, told CTV News Hashemi was embarrassed and shaken up.

"He didn’t know what to do in that situation. I don’t blame him," Bishop said.

According to Bishop, Hashemi grabbed a life jacket, then swam out to the boat and detached it from the trailer.

"I thought maybe the boat was going to sink too," Hashemi said. "Lots of people tried to help me out. Thanks to them."

While Hashemi says the second or two he leaped to safety went by in a blur, he clearly remembers he didn’t put his SUV into park.

Instead, he says he used the "Auto Hold" button, which is widely understood to be a tool for drivers in stop-and-go traffic.

An online informational video for the Mitsubishi Outlander explains that the Auto Hold feature only works when a driver has his seatbelt on, and it’s not a substitute for the parking brake.

"I thought Auto Hold could hold the car…looks like it didn’t work this time," Hashemi says, adding that he didn’t engage the SUV’s electronic parking brake, and also thinks he left the shifter in reverse.

A close check of the video confirms the lower left back up light appeared to be on. 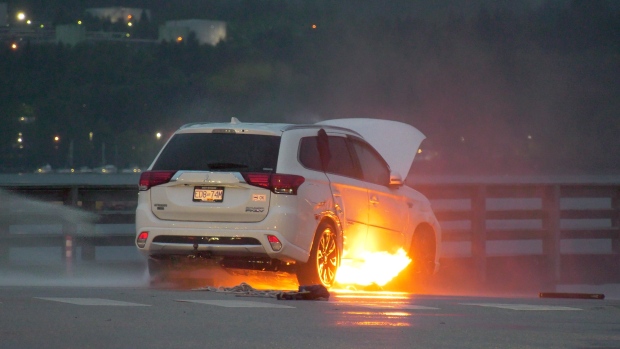 Hybrid SUV a write off after battery explodes

When firefighters eventually pulled Hashemi’s Outlander out of the water Thursday evening, they heard a pop as the battery suddenly shorted.

The SUV was towed away, and Hashemi says it’s a write-off.

He says he’s learned if he’s ever in similar circumstances again, to just let it go, and not try to save his car or his boat.

And when I ask if he plans to get back on the water anytime soon, he laughs.

"I’m afraid for a little bit for now," Hashemi says.