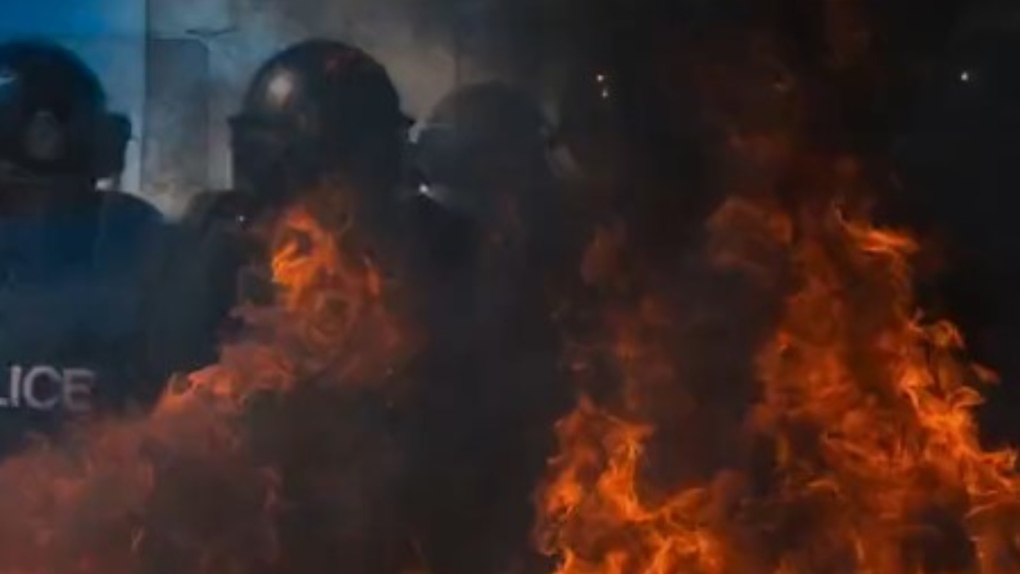 A recruiting video posted on Twitter by the Vancouver Police Department is seen in a screenshot. (Twitter/VancouverPD)

The Vancouver Police Department has apologized after posting a recruiting video featuring a montage of armed officers in tactical gear, which drew swift backlash on social media.

The approximately 30-second clip, which was posted on Twitter but has since been removed, included images of officers scaling buildings, standing beside flames and aiming rifles, all set to an intense instrumental soundtrack – prompting some viewers to question what kind of recruits the department was hoping to attract.

"It's so far removed from the modern reality of civil policing in a city like Vancouver, but a particular kind of individual might be drawn to this as reflecting normal police work."

Others found the timing of the post distasteful, coming out amid a steady stream of videos depicting Russia's ongoing invasion of Ukraine. The Vancouver Police Department eventually deleted the clip and issued a brief apology.

"After listening to your feedback, we have pulled the 'tactical response' video. We apologize if the images were upsetting for some, particularly during current world events," the VPD wrote on Twitter Tuesday.

Not everyone found the video upsetting. Some social media users thanked police for "trying to convey the necessary albeit unsavoury elements" of their work.

The video was one of five published by the department this week, all highlighting different aspect of policing, but none of the others generated such a heated response.

Police spokesperson Sgt. Steve Addison said the department's Emergency Response Team responds to "approximately one critical incident a day" in the city, ranging from kidnappings to hostage-takings to bomb threats. He provided five examples dating from Jan. 20 to March 1, including one in which ERT members rappelled over the side of the Burrard Street Bridge to help a woman who was attempting suicide.

"Policing is a dangerous, but rewarding job. Anyone who wants to become a police officer needs to know what opportunities await, and what may be expected of them. Recruits who are willing to take on that challenge are exactly the ones we need and want," Addison said in an email.

Gordon argued the recruiting video still seems tone deaf, particularly following years of debate over the militarization of civil police forces, and questioned whether the Vancouver Police Board or Chief Adam Palmer were aware of its contents.

"I thought we'd gotten past this," he added. "The person who conjured it and approved it needs to be held to account for that."

CTV News asked Addison whether the board or police chief viewed the video prior to its release, but did not receive a response.

This is the recruitment video the VPD released today then later took down. If you pretend it’s a parody of a police force that’s paid zero attention to the cultural conversation of the past 2 years it’s actually pretty hilarious satire. Alas it isn’t.pic.twitter.com/dbuWA4zxRv