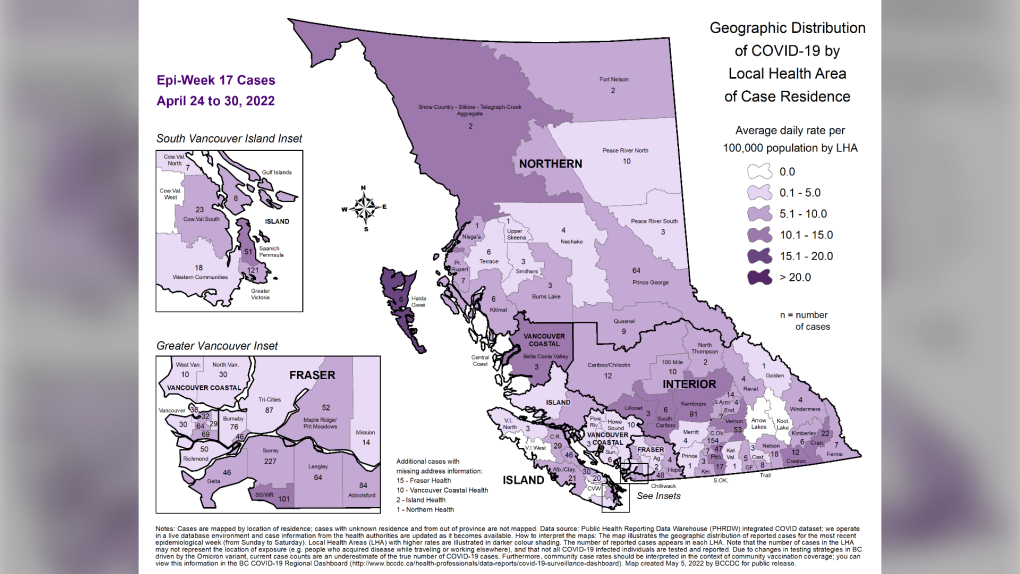 This map produced by the B.C. Centre for Disease Control shows the number and relative per-capita rate of positive PCR tests for COVID-19 for the week of April 24 to 30. A full-sized version of the map can be found on the BCCDC website.

The number of COVID-19 patients in B.C. hospitals declined this week for the first time in more than a month, according to the B.C. Centre for Disease Control's weekly update on pandemic data.

But while the overall total was down from 570 last Thursday to 550 this week, two health authorities saw their hospital census increase during the period.

The number of test-positive COVID-19 patients in Fraser Health hospitals rose to 229, up from 209 the previous week, according to the BCCDC's COVID-19 dashboard.

Interior Health also saw an increase, from 98 last week to 103 as of Thursday.

Those increases were offset by declines in B.C.'s three other regional health authorities. Vancouver Coastal Health saw its total drop from 155 to 128, while Island Health saw a decline from 76 to 67 and Northern Health dropped from 24 to 18.

All of these figures represent total patients in hospital with COVID-19, regardless of whether the disease was the reason for their hospitalization.

Since the province stopped attempting to filter out "incidental" hospitalizations in January, there have been as many as 985 patients in hospital on a Thursday and as few as 255.

The BCCDC does not regularly release information on the number of COVID-19 patients in specific hospitals, but it does release subregional data on where people are testing positive for the disease.

Available data on new COVID-19 infections in B.C. is limited by the province's testing strategy. The BCCDC only reports "lab-confirmed, lab-probable and epi-linked" cases of the coronavirus. It does not collect or release the results of at-home rapid tests, which are the only testing option available to most B.C. residents.

Those who do receive lab-based PCR testing in B.C. are those whose care will be altered by a positive result - such as people who are at risk of serious illness and eligible for antiviral medication.

During the week of April 24 to 30, the most recent week for which geographic case data has been published, the local health area that includes most of the city of Surrey recorded the largest number of positive tests in the province, with 227.

Other urban centres also recorded large shares of the 2,283 total cases confirmed through PCR testing during the week.

The city of Vancouver is divided into six local health areas, but those areas combined to record 262 new cases from April 24 to 30.

On a per-capita basis, however, the most daily positive tests happened in Haida Gwaii, where there were just six total cases recorded, but the region's small population means that total equates to roughly 18 new cases per 100,000 residents per day.

The South Surrey/White Rock local health area had the highest case rate in the Lower Mainland, with 13 new positive tests per 100,000 residents each day.

Ukraine's richest man filed a lawsuit against Russia at Europe’s top human rights court on Monday, seeking compensation over what he has said are billions of dollars in business losses since Russia's invasion.

The federal government has created a special task force to help tackle the major delays with immigration applications and passport processing that have left Canadians frustrated.

Abortion may be legal in Canada but accessing services very much depends on where you live, one advocate says.