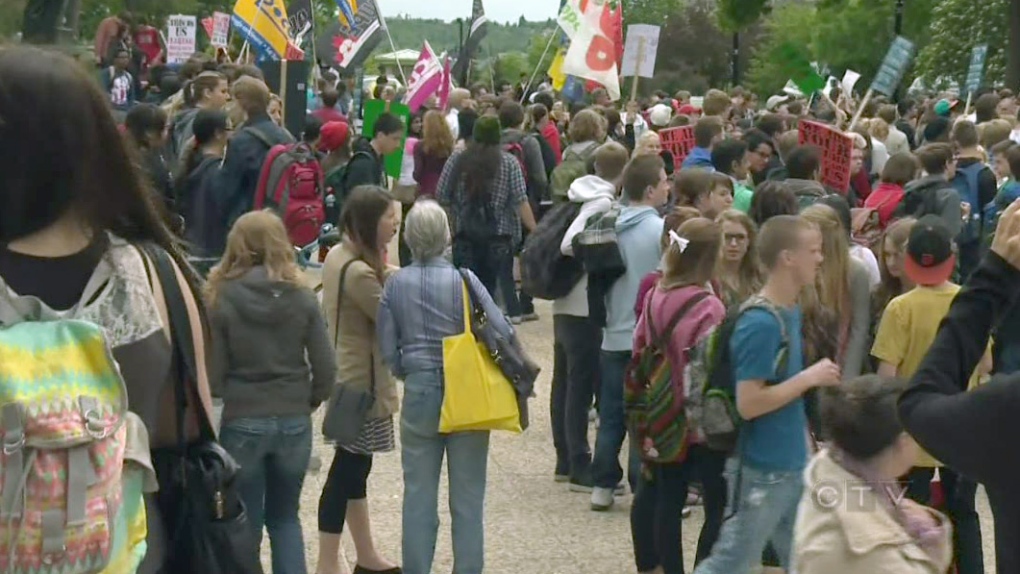 Students say they plan to leave their classes to rally outside starting 9 a.m. on Wednesday, the only day this week when unionized teachers are not holding rotating strike action. (File photo)

VANCOUVER -- When she was in Grade 4, Victoria Barker sat at home for two weeks during her first teachers' strike, filling out educational worksheets her parents printed off the Internet because she couldn't stop her passion for learning.

Her love for school, though, has been chipped away in the ensuing eight years, as she's lost classroom time and field trips, and felt the anxiety of missing exams as a result of job action by teachers that's become the hallmark of a British Columbia public education.

Now on the verge of graduating from Grade 12 in Surrey, B.C., Barker finds herself in the midst of yet another teachers' dispute. She is now mobilizing students for a provincewide walkout on Wednesday to let off frustrations she said have built up like emotions in a child caught between two divorcing parents.

"It's two adult groups that are arguing and they can't come to an agreement among themselves," said the 18-year-old Lord Tweedsmuir secondary school student. "So they decide to pull us in and use us as their own pawns."

More than 11,000 people on Monday had RSVP'd their likely participation in the walkout event posted by Barker on Facebook. The plan is for students to leave their classes and rally outside starting 9 a.m. on the only day this week when unionized teachers are not holding rotating strike action.

"No one really asks us how we feel about all this or what our opinion is about this. And yet it's our education," Barker said. "It does feel like we can't do anything about it, unless we take a really big stand against both (sides in the dispute.)"

The protest comes at the start of a second week of rotating strikes by teachers.

The stage-two job action by more than 40,000 teachers equates to about 150,000 students off school in various districts each day this week except Wednesday.

Administrators were aware of the planned demonstration and were discussing their response, said a spokesman for the Vancouver School Board, which presides over 91 elementary schools or annexes and 18 secondary schools.

Lack of supervision has already forced the cancellation of several day camps, track-and-field meets and a big event for special-needs students, said board spokesman Kurt Heinrich. Field trips were being dealt with by senior administrators and staff on a case-by-case basis, he said.

"We have been hearing about significant disruptions across the entire school district," Heinrich said.

Barker said students are encouraged to gather outside their schools or in near-by, low-traffic areas and hoist signs with slogans like "Strike + Lockout = Walkout."

She recognized a "possibility" students could be reprimanded for what effectively amounts to skipping class but was hopeful media attention would result in leeway.

"I hope both sides will realize we are just fed up," Barker said. "We're tired of being put in the middle of the two sides and we'd like to see some new form of a negotiation process put in place so that it doesn't happen again and affect future generations."

Barker described herself as a hard worker and straight-A student who is not overly involved in other school activities. She said she got the idea to stage a protest from an adult's suggestion, though she declined to elaborate.

The province countered the strikes with a partial lockout that included docking teachers' pay by 10 per cent starting May 26. But the union's lawyers argued before the provincial labour board last week that employers have no authority to refuse wages.

The government contends teachers shouldn't expect full salary when they're no longer fulfilling all their duties.

Bargaining is set to resume on Tuesday. The government has said it's offering a 7.3 per cent wage increase over six years while the teachers' union said it wants 13.7 per cent over four years.

The union said despite two court rulings that affirmed the provincial government illegally stripped provisions from the contract on class size and composition, the issues remain a major sticking point.