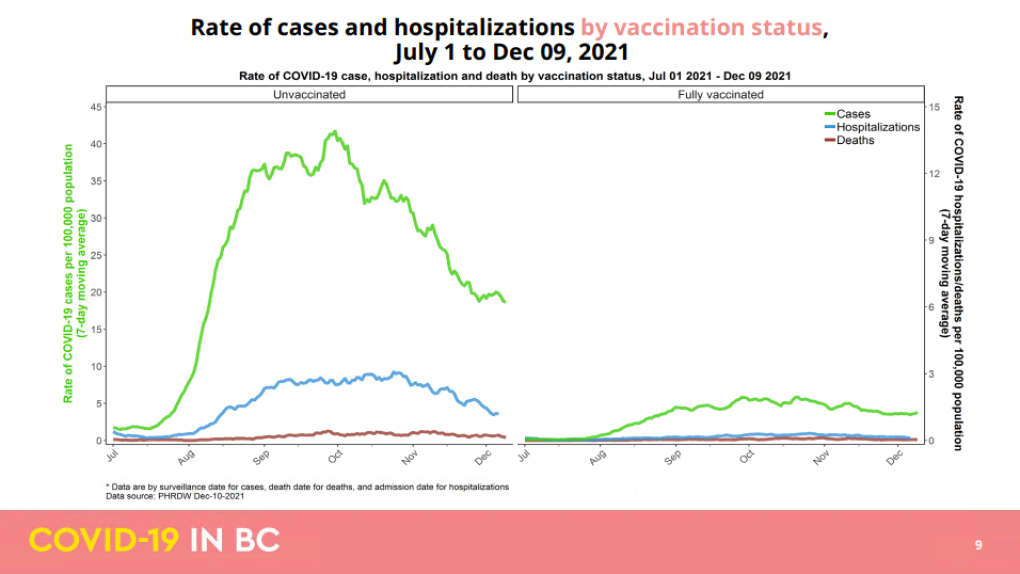 B.C. health officials are once again warning the public about the risks of remaining unvaccinated.

The data suggested that the unvaccinated made up 68 per cent of hospitalizations and 78 per cent of critical care admissions in B.C. between Nov. 9 to Dec. 9, despite representing less than one-fifth of the population.

Henry explained that the patterns in the latest COVID-19 modelling data are indicative of what the province has been seeing in the pandemic in recent weeks, with high case rates and high hospitalization rates in people who have not yet been protected by vaccination.

Henry said even though vaccines are not 100 per cent effective in preventing people from becoming infected, the data indicates immunization protects people from developing more serious cases of COVID-19 that require hospital and ICU care.

Henry said that people who are unvaccinated have more severe cases, even in their 30s and 40s and that's mainly due to the Delta variant.

She added that the majority of deaths continue to be in people who are not immunized against COVID-19.

The data – adjusted for age difference – indicates that someone who is 50 years old and unvaccinated, is seven times more likely to become infected with COVID-19.

When it comes to hospitalization rates among children, Henry said fortunately there's been mostly mild illness in kids aged 12 to 17 and a low number of hospitalizations for those unvaccinated.

However, she added that there have been zero hospitalizations for those in that age group that are fully vaccinated.