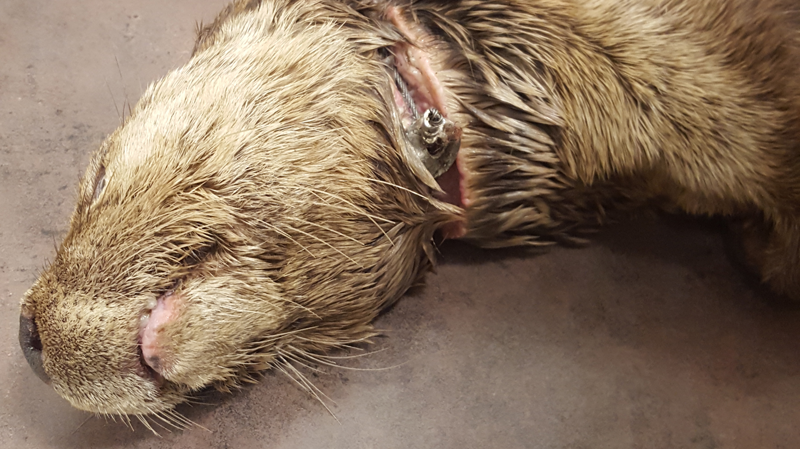 An injured river otter was found snared in wire near Ambleside Pier in West Vancouver on Sunday, May 21, 2017. (The Fur-Bearers)

An animal advocacy group is offering a $1,000 reward to help identify the person responsible for snaring a river otter in West Vancouver, leaving the creature suffering for days on end.

The adult female otter was found injured near Ambleside Pier on Sunday and later rescued by members of the Squamish Neighbourhood Animal Partnership and Protection Society.

There was wire cutting into the flesh on the otter's neck, and advocates believe it had been suffering for up to two weeks.

"The pain she must have endured is unfathomable," Lesley Fox, executive director of Fur-Bearers, said in a news release. "There is absolutely no reason that such agony should be endured."

Fur-Bearers, a Vancouver-based anti-cruelty organization, said the animal is being treated with antibiotics, and might eventually be able to be released back into the wild.

It's unclear exactly how it ended up ensared in the first place. Fox said while it's possible the wire was being used for a legal, legitimate purpose, "by all accounts it looks and acts like a snare – used out of season."

The group's reward is being offered to anyone who can provide information that leads to the capture and conviction of the person who set the suspected snare.

Anyone with information is asked to contact the B.C. Conservation Officers Service.

Correction: A previous version of this story incorrectly stated the Fur-Bearers had rescued the otter.