After seeing record or near-record gas prices for a week, Metro Vancouver is predicted to see a significant drop in the cost to fill up a tank before the long weekend.

According to Gas Wizard, a Canadian gas-price prediction website, the price of gas in Vancouver is expected to fall by 12 cents per litre on Friday. That means gas is predicted to be 214.9 cents per litre, down from Thursday's cost of 226.9.

The price drop comes after some stations in the region had a record-breaking price of 233.9 cents per litre for several days in a row. 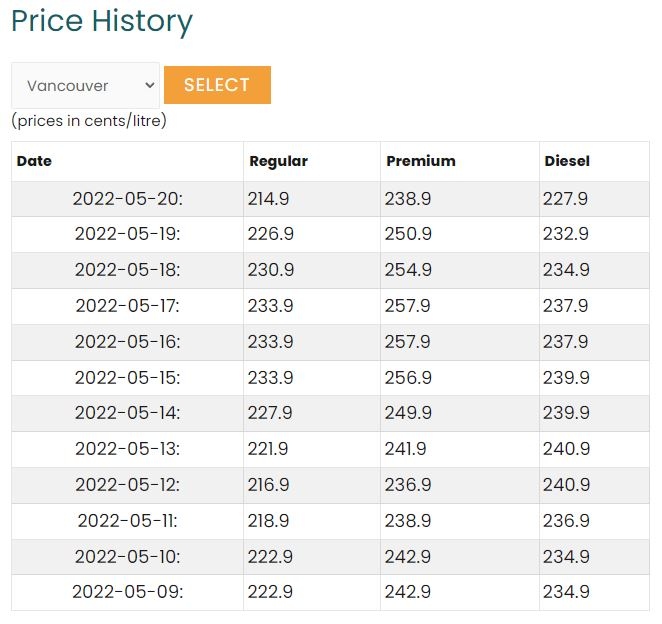 As of Thursday, the Greater Vancouver area still has the highest prices in the country, according to a heat map from GasBuddy.com.

High prices across the province have led to calls for free transit over the summer months, when prices are predicted to reach 250 cents per litre.

They've also led to many Canadians choosing to go south of the border to fill up. On Wednesday, a gallon of regular gas was $5.35 on credit card at a station near the Pacific Highway crossing in Blaine. That equates to $1.82 a litre Canadian, which is about 50 cents cheaper than most stations in Metro Vancouver.

Along with residents, local charities are struggling with the soaring cost of gas, with some worried they might have to cut programs.

For now, the B.C. government is aiming to give some relief from the high prices in the form of a $110 rebate for most ICBC customers. Some residents will see their rebate arrive by direct deposit this month, others will receive a cheque in June.

That rebate was announced in March, when the record price was 214.9 cents per litre – the same cost Metro Vancouver is expected to see on Friday.