He misses his school.

“He loves his classroom and his teacher," explained his mom, Megan Pemble. “It’s tough not seeing his friends in the usual routine.”

Reid is one of about 300 students displaced after two Abbotsford, B.C., schools shut down because of flooding damage.

Reid is a student at Upper Sumas Elementary where the district said several feet of water poured into the building. The other school that’s closed is Barrowtown Elementary.

The flooding left the Abbotsford School District scrambling to find a way to get kids back to class.

It took a lot of juggling.

“We’ve got classroom spaces all around the district that we’ve set up temporarily and they’re doing quite well so far,” explained superintendent Kevin Godden. They hope to have the students all together in the same place in the new year.

Some students from Barrowtown Elementary are being taught in space offered by a Chilliwack church, which is closer to their homes. Other students are learning remotely.

The other challenge the district has faced is staffing.

Godden said about 250 Abbotsford School District staff live in Chilliwack, and highway closures have made getting to work difficult, if not impossible at times.

“We’ve hired a couple of coaches to transport those staff the long way on Highway 7 here every day,” said Godden.

The commute, he said, is two hours each way on a good day. The number of teachers using the bus varies, but as many as 70 have made the commute on any given day. There are a couple pick-up and drop-off locations.

“In addition to that, we have some hotel rooms for staff who are willing and able to stay in the community," Godden added.

Reid’s first day in his “new” class was Tuesday. On Wednesday, flooding kept him at home. 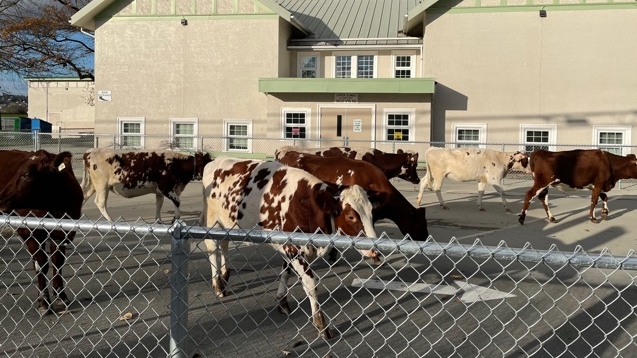 “When we went to check the road this morning, the water was already rushing over Whatcom (Road),” said Reid’s mom.

Meanwhile, Megan Pemble’s older son, who is in Grade 6, is staying with his grandmother.

“He goes to Abby Middle (school) so it wasn’t safe for us to keep travelling back and forth,” Pemble said.

Godden said while damage assessments are still being done, it’s expected it will take four or five months to repair Upper Sumas Elementary. Barrowtown Elementary will open much sooner.