Events guide: How to mark Truth and Reconciliation Day in Vancouver

Events guide: How to mark Truth and Reconciliation Day in Vancouver 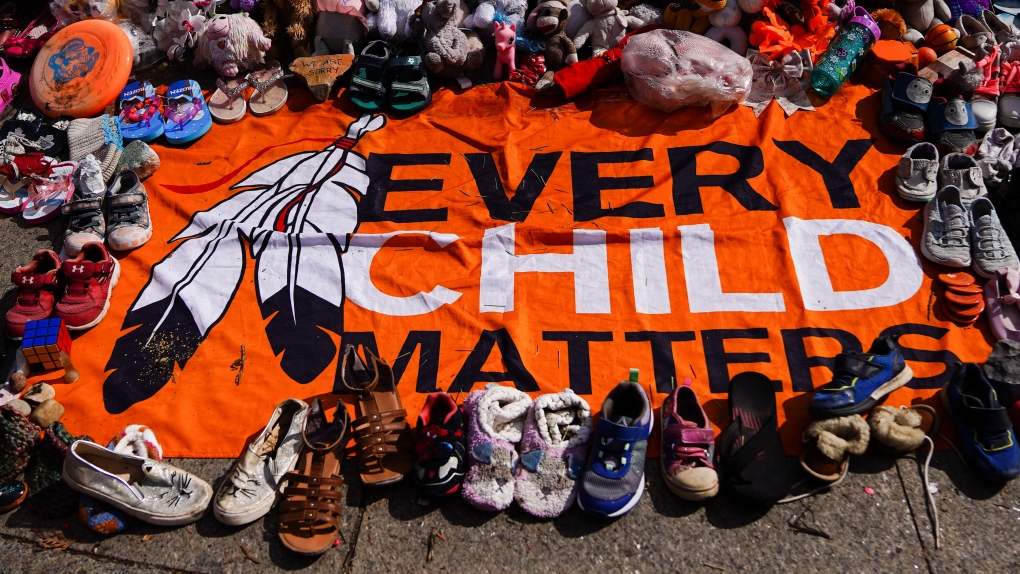 A memorial is displayed on Parliament Hill as ceremonies take place for National Day for Truth and Reconciliation in Ottawa on Thursday, Sept. 30, 2021. THE CANADIAN PRESS/Sean Kilpatrick

As Canada marks the second National Day for Truth and Reconciliation Friday, some British Columbians may be wondering how to spend the day in a meaningful way.

Several events are taking place in Vancouver for those who have the day off to reflect on the past and focus on a path towards reconciliation.

The National Day for Truth and Reconciliation was declared last year following the horrific discovery of hundreds of potential burial sites at the former Kamloops Indian Residential School.

Ground-penetrating radar led to similar discoveries at other former residential schools across the country.

Former Truth and Reconciliation Commission chair Murray Sinclair has estimated some 6,000 children may have died at more than 130 residential schools that were operated across Canada between 1874 and 1996.

The National Day for Truth and Reconciliation was declared as a way for both Indigenous and non-Indigenous people to honour the children who never made it home as well as residential school survivors and their families.

Here's a quick look at some of the truth and reconciliation events taking place in Vancouver Friday.

Members of the Tsleil-Waututh Nation plan to walk 8.5 kilometres from the former St. Paul's Indian Residential School in North Vancouver to their reserve on Dollarton Highway as they remember the effects and legacy of residential schools.

The Nisga'a Ts'amiks Vancouver Society is hosting an Orange Shirt Day event at 1 p.m. on the east side of John Hendry Park to honour the lost children and survivors from the residential school system.

Musqueam First Nation is hosting a two-part event to honour those who attended residential schools. There will be a community lunch at the Musqueam Cultural Centre from 11 a.m. to 1 p.m., which is open only to the Musqueam community. There will also be a gathering and renaming ceremony open to the public, which will take place from 1 p.m. to 3 p.m. at the Musqueam Community Centre. Members will gift a new name to the City of Vancouver to replace Trutch Street in Kitsilano.

The University of British Columbia is holding its Intergenerational March to commemorate Orange Shirt Day from 11 a.m. to 2:30 p.m. at the Indian Residential School History & Dialogue Centre. Bannock and tea will be available for purchase and there will be a special performance by Tsatsu Stalqya (Coastal Wolf Pack).

Britannia will be hosting its own Orange Shirt Day event from 11 a.m. to 2 p.m. at Grandview Park. It will include a ceremony, lunch, drum circle and several other activities to mark the National Day for Truth and Reconciliation.

A gathering is being held at 2 p.m. at 700 Templeton Drive to mark Orange Shirt Day. Attendees can expect a drumming performance, storytelling by elders and an Indigenous plant walk.

During the matchup at B.C. Place, members of the Lions and the Ottawa Redblacks will be sporting orange in recognition of the federal statutory holiday. The first 10,000 fans through stadium doors will also receive a complimentary orange shirt.

The Museum of Vancouver is offering complimentary admission to anyone wearing an orange shirt to commemorate the legacy of residential schools. Donations will also be accepted on behalf of the Indian Residential School Survivors Society.

A free barbecue is being held at Oppenheimer Park at noon to honour the survivors of residential schools. There will also be Indigenous vendors and giveaways. Attendees are asked to wear an orange shirt.

BREAKING | Bank of Canada raises key interest rate to 4.25 per cent, its highest since 2008

Scientists discovered the oldest known DNA and used it to reveal what life was like 2 million years ago in the northern tip of Greenland.

Time Magazine on Wednesday named Ukrainian President Volodymyr Zelenskyy its person of the year, awarding him the accolade 'for proving that courage can be as contagious as fear.'