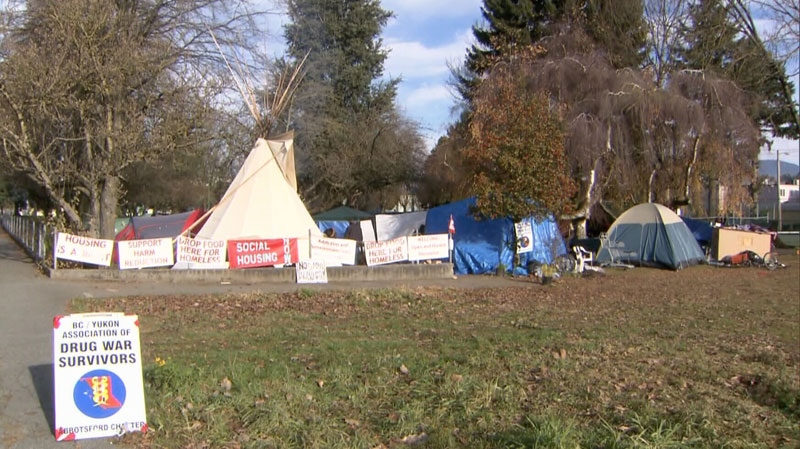 Jubilee Park in Abbotsford is occupied by a homeless protest camp on Nov. 26, 2013. (CTV)

VANCOUVER - Legal advocates for a group of homeless people in B.C.'s Fraser Valley say they won't have to pay tens of thousands of dollars to access police documents after a court ruling.

Pivot Legal Society is representing the BC/Yukon Association of Drug War Survivors in a B.C. Supreme Court lawsuit that will be heard starting June 29.

The association is challenging the City of Abbotsford's 2013 eviction of homeless people from a park, as well as three bylaws that affect the local street population.

Pivot Legal lawyer DJ Larkin says the city argued in the B.C. Court of Appeal this week that the province's supreme court should not hear how police and city staff enforced bylaws against the homeless.

Larkin says the appeal court ruled Friday that the information -- including allegations that city officials dumped chicken manure on an encampment and pepper sprayed tents -- should be heard in court.

She says the court also overturned an earlier decision requiring the association to pay for the disclosure of Abbotsford Police Department documents, estimated to cost as much as $29,000.