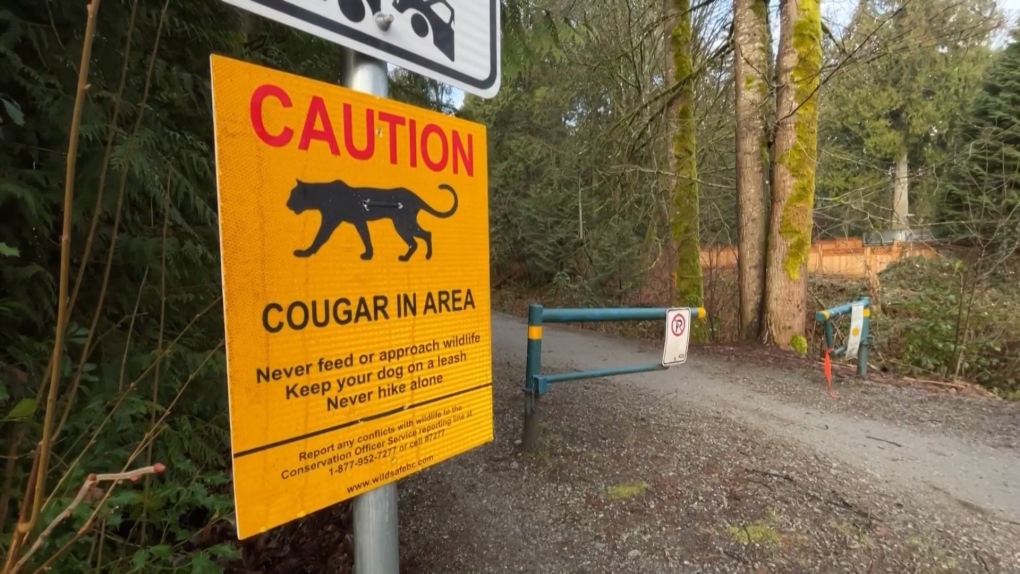 VANCOUVER -- After an increase in reports of sightings and two recent attacks on dogs, a cougar in Port Moody, B.C., was euthanized over the weekend.

Conservation officers say a cougar was tranquilized near Ioco Road and later euthanized on Sunday because of an "escalating public safety risk."

"Over the past couple of days, cougars have been spotted in yards and near people, showing no fear of humans. There have also been daytime sightings of cougars near a local elementary school," said David Karn, spokesperson for the BC Conservation Officer Service with the province's environment ministry, in an emailed statement to CTV News.

On Sunday, three cougars were spotted during the daylight hours in a residential area of the city "for an extended period of time." Officers tried to encourage the animals to leave, but weren't successful.

Karn said the behaviour is both unnatural for the large cats and also "highly concerning."

"This behaviour indicates these cougars are highly habituated to human presence and comfortable living and hunting non-natural prey in a residential setting – this is an extreme public safety risk," Karn said.

Last Thursday, a three-month-old German shepherd puppy set to be trained as a search-and-rescue dog was snatched by a cougar in Anmore. The puppy was on a leash at the time and walking with its owner.

Just a couple days before that, a small dog was attacked by a cougar while walking on-leash with its owner in the Heritage Mountain area of Port Moody. The Maltese shih-tzu cross was rushed to a local vet for treatment but didn't survive.

Since April 1, 2020, the BCCOS has received 82 reports of cougars in the Anmore, Belcarra and Port Moody areas.

And, since Aug. 1, 2020, cougars have killed three dogs and injured two others in the Anmore and Port Moody areas, the BCCOS says.

The BCCOS is asking the public to stay aware of surroundings and keep cougar safety tips in mind. Those tips include staying calm, keeping the cougar in view and backing away slowly. Small children should be picked up immediately and an individual should never run or turn their back on a cougar.

Anyone who spots a cougar in a residential area should report it to the Report All Poachers and Polluters line at 1-877-952-7277.