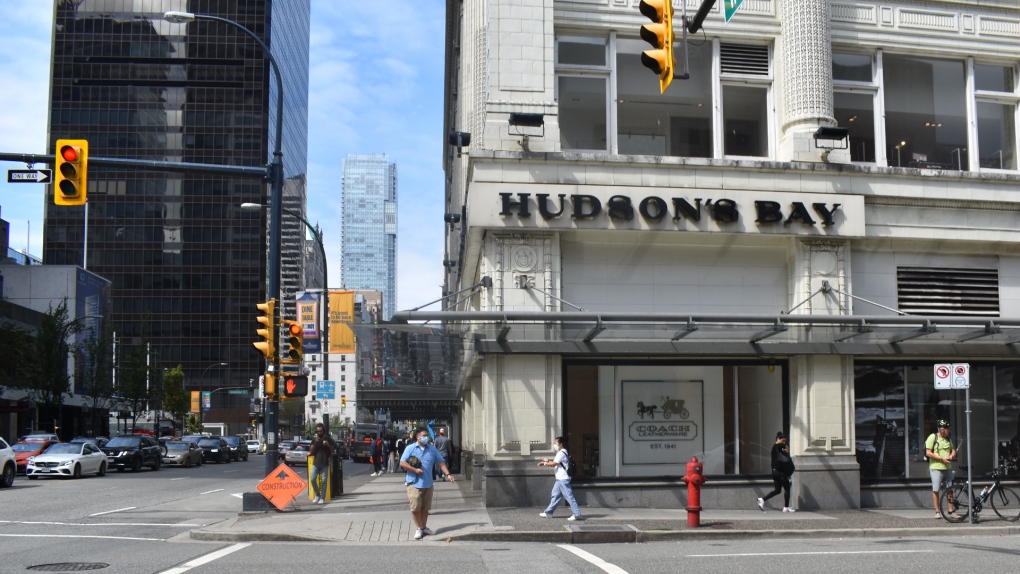 The Hudson's Bay store at Granville and Georgia streets in downtown Vancouver is seen in an Aug. 18, 2021 file image.

A human rights complaint from a Black man who alleged he was racially profiled at a Hudson's Bay store in downtown Vancouver has been allowed to move forward.

Bento Matias told the B.C. Human Rights Tribunal a security guard followed him outside in February 2019, apparently because he was carrying two jackets from his work – both of which had company logos on them.

Matias said he asked the guard, "What's the matter, lady? Are you following me?" but that she ignored him, and instead appeared to be providing his description to police over the phone. The two ultimately spoke with officers who happened to be nearby, and confirmed he was innocent.

His complaint alleges he was suspected of shoplifting because of his race.

When providing her version of the events to her employer, the guard said the phone call with police was fake, that Matias had yelled at her, and that she felt threatened during the encounter. She has since resigned, according to tribunal documents.

Hudson's Bay Company applied to have Matias's complaint dismissed – arguing there was no racial motivation behind the employee's behaviour and that reasonable steps had already been taken to address his concerns – but was rejected.

"HBC has not convinced me that Mr. Matias has no reasonable prospect of proving that he was discriminated against," tribunal member Amber Prince wrote in a decision posted online this week.

Prince noted the security guard had failed to follow the company's established protocols, which don't allow employees to apprehend anyone for shoplifting unless they witness them taking identifiable merchandise.

The tribunal member called HBC's existing standards and training aimed at avoiding bias "commendable," but said the worker's failure to apply them leaves the question of whether Matias was profiled open, and up for further examination at a hearing.

While Matias's complaint has been allowed to proceed, the tribunal noted that his allegations have yet to be proven.

The company said it investigated his concerns after he first reported them, and was going to fire the guard before she handed in her resignation. HBC also offered Matias a $1,250 settlement in exchange for withdrawing his human rights complaint and removing any social media posts referencing the company, but he refused.

The complainant said he feels unwelcome in the store, has lost sleep and experienced feelings of shame, anxiety and depression as a result of the incident. On top of financial compensation, he has asked for a direct apology from the former security guard, and for HBC to update its policies and training.

In explaining the decision to accept Matias’s complaint, Prince noted that it “arises in a social context of persistent patterns of anti-Black racism.”

“It is widely recognized that racial profiling is one form of anti‐Black racism, and that racialized groups are disproportionately criminalized and targeted, stopped, and subjected to pointed scrutiny," the member wrote.

“On balance, the purposes of the (B.C. Human Rights) Code are served by granting Mr. Matias full access to the tribunal’s services.”

Reached for comment on the complaint, the Hudson's Bay Company said it is "committed to creating an inclusive shopping environment in which all individuals are treated with respect."

"All HBC associates are required to abide by company policies which explicitly prohibit discrimination based on race, age, gender identity, gender expression, and all characteristics protected under the Human Rights Code," a spokesperson said in an email.