While intense rainfall has eased in much of southern B.C., the province is grappling with the severe impacts of flooding and wind that's led to evacuation orders, highway closures, roadway collapses and power outages.

Two days of unrelenting rainfall saw rivers of mud and rock come crashing down on highways, forcing all highways in and out of the Lower Mainland to see some form of closure.

At least one person has died as a result of these landslides. A woman's body was recovered near Pemberton Monday, the RCMP confirmed the following afternoon.

Evacuation orders displaced more than 7,000 people after the entire city of Merritt had to leave their homes.

Other parts of B.C., including Electoral Area I, in Blue Sky Country, and specific neighbourhoods in Chilliwack are also under evacuation order.

A burst dyke also put most of the town of Princeton underwater and some neighbourhoods in Abbotsford, where a local state of emergency was declared, were also put under evacuation order.

And there are calls for a provincial state of emergency to be declared due to the extreme weather.

In a statement Tuesday, the First Nations Leadership Council said many B.C. nations are under evacuation order or alert, and issuing such an order would make more resources available to those affected.

Major routes connecting the Lower Mainland to the Interior were blocked, including stretches of Highway 5, Highway 3 and parts of Highway 1.

In some mudslide areas, crews are still searching for people who may have been trapped in debris. On Monday, 275 people were rescued by helicopter from a slide site on Highway 7.

Provincial officials said all trapped in that area had been rescued by the afternoon. Further north, a search-and-rescue team returned to a section of Highway 99 where several vehicles are believed to have been swept away.

A full list of closed highways can be seen here.

Tuesday saw the second day of school closures for some districts and new closures for others. In the Lower Mainland, Abbotsford, Chilliwack and Mission all cancelled class for the day over safety concerns because of the flooding. 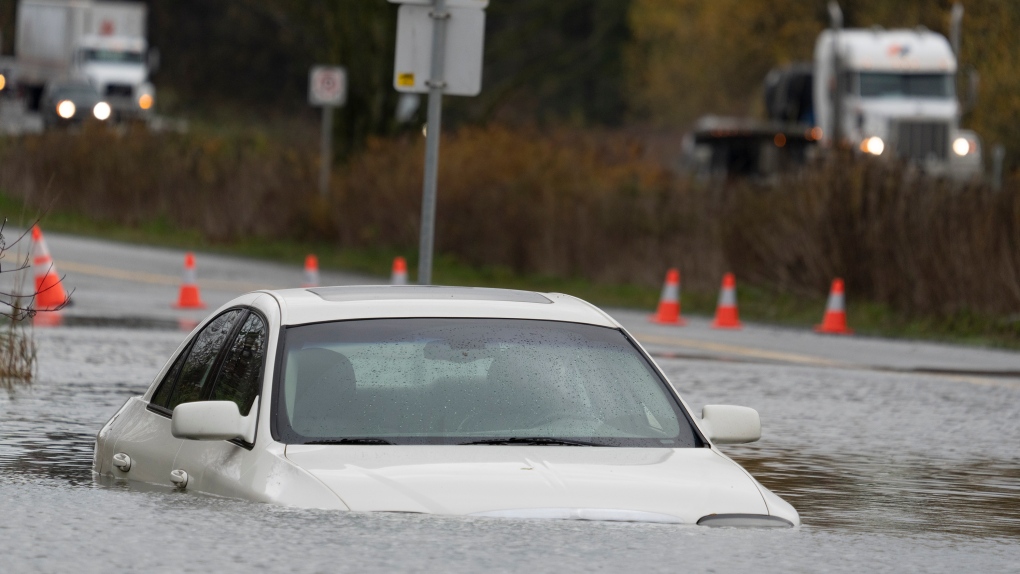 A vehicle is submerged in flood waters along a road in Abbotsford, B.C., Monday, Nov. 15, 2021. THE CANADIAN PRESS/Jonathan Hayward

Evacuation orders are in place for several communities across southern B.C.

The entire city of Merritt was forced to leave Monday. While the order began with just a few neighbourhoods, it was eventually expanded city-wide and the community's approximately 7,100 residents were urged to take refuge with family or friends elsewhere in the province.

In an update Tuesday, Greg Lowis, the emergency public information officer for Merritt, told CTV News one of the three bridges into the city collapsed into the river.

"We're not confident about the structural integrity of any bridge in the city," Lowis said. "We are contacting structural bridge engineers and arranging for them to do inspections and find out how safe they are."

Lowis said an inspection won't be possible until water levels have receded.

As well, dozens of homes in the Regional District of Okanagan-Similkameen were evacuated late Sunday night after flooding on the Tulameen River posed "immediate danger to life safety." Some people living in electoral areas B, H and G were ordered to leave Monday, with many other areas placed under evacuation alert. A full list of orders can be seen on the RDOS website.

Electoral Area I in Blue Sky Country is under an evacuation order.

The Sumas Prairie's evacuation order area was expanded Tuesday morning because of a localized landslide. A full list of properties ordered to leave can be seen on the city's website.

Tied to the Sumas Prairie flooding, the community of Yarrow was also ordered to evacuate.

Meanwhile, thousands of British Columbians were left without power Monday and Tuesday due to heavy rains and strong winds. In some places, like Hope, entire communities faced outages.

"As our crews dealt with the aftermath of the 'atmospheric river' that impacted southern B.C., our infrastructure in Hope was significantly damaged by a mudslide, knocking out power to the community," BC Hydro's Kevin Aquino told CTV News Vancouver in an emailed statement.

Power was restored to about 56,000 customers overnight Monday, and another 20,000 during the day Tuesday.

About 6,000 were still in the dark due to the storm by late afternoon.