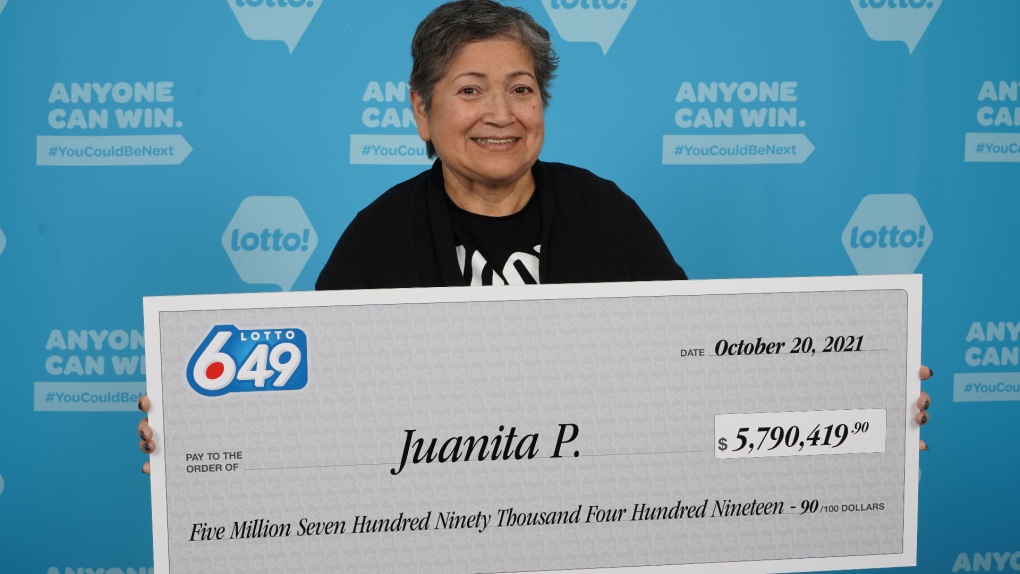 Juanita Parnell is pictured in a photo provided by BCLC.
VANCOUVER -

One of the British Columbia's newest multimillionaires hopes to take her grandchildren on vacation after winning a major prize in a draw she almost didn't take part in.

Juanita Parnell, of Prince Rupert, won $5,790,419.90 in a recent Lotto 6/49 draw after matching all six numbers. The jackpot was split between Parnell and another ticketholder, who played the lottery in Ontario.

It was a win that almost didn't happen, she told the B.C. Lottery Corporation.

"I was in a rush. I had actually forgotten and was hurrying to buy (before the deadline for the draw), and was worried I would miss the numbers," she said in a statement issued by BCLC about two weeks later.

But she made it to the cash register in time, and played the same set of numbers she's been playing for two decades – numbers she says don't actually have any significance to her.

"There's no rhyme or reason why… I think I've missed playing them only three times," Parnell said.

She found out she won, but tried to keep it quiet at first. It wasn't easy.

"I'm pretty sure it was 3:30 in the morning and I was still awake," she said of how she reacted to learning she'd won the Oct. 6 draw.

Indeed, while no names were revealed, BCLC announced right after the draw that the winning tickets were sold in Prince Rupert and Ottawa.

Parnell wasn't revealed publicly as the B.C. winner until Wednesday, and though she's had some time to think, she's still not sure what she'll do with the bulk of the money.

She does have one plan already: taking her grandchildren to Disney World.

"We've never been able to go on a vacation together all at once," she said, joking that she'd be sure to go outside of storm season, meaning her family won't be hopping on a plane in the immediate future.

Parnell is one of several B.C. lottery winners this year, but the chances of winning any game are extremely low.