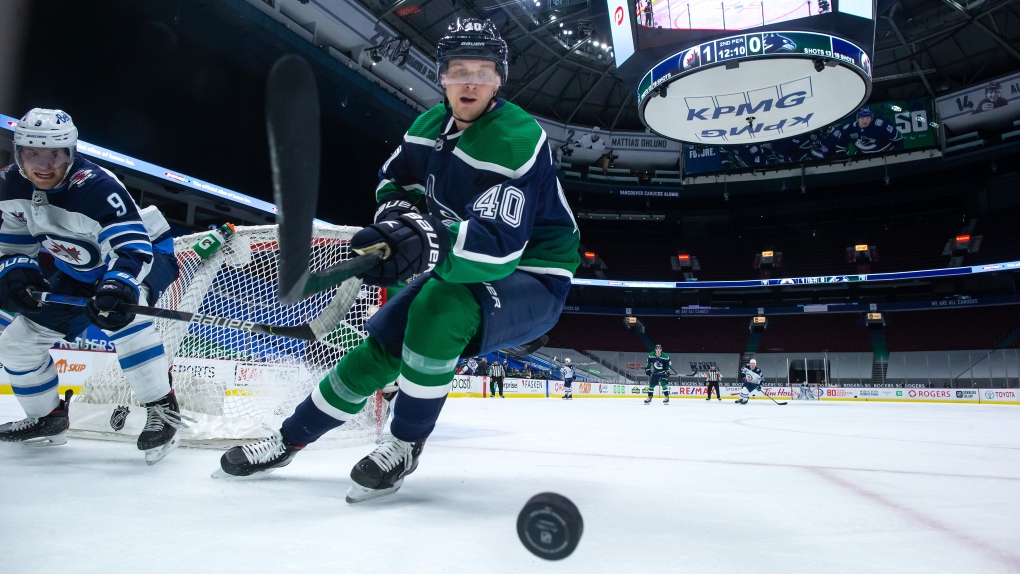 Vancouver Canucks' Elias Pettersson (40), of Sweden, reaches for the puck during the second period of an NHL hockey game in Vancouver, on Friday, Feb. 19, 2021. (Darryl Dyck / THE CANADIAN PRESS)
Vancouver -

The Vancouver Canucks say Elias Pettersson has been placed into the NHL's COVID-19 protocol.

The Canucks (16-15-3) announced the news on Twitter on Wednesday, a scheduled day off for the team.

Pettersson, a 23-year-old Swedish centre, has six goals and 11 assists in 34 games this season.

He is the fifth Vancouver player added to the COVID protocols in a week, following forwards Brock Boeser, Phillip Di Giuseppe (both Dec. 29), Justin Dowling (Dec. 30) and Jason Dickinson (Jan. 1).

Canucks coach Bruce Boudreau confirmed Tuesday that players who tested positive for the virus while the team was playing in the U.S. have returned to Vancouver via a medevac flight.

The Canucks are set to host the Ottawa Senators on Saturday.

This report by The Canadian Press was first published Jan. 5, 2022.