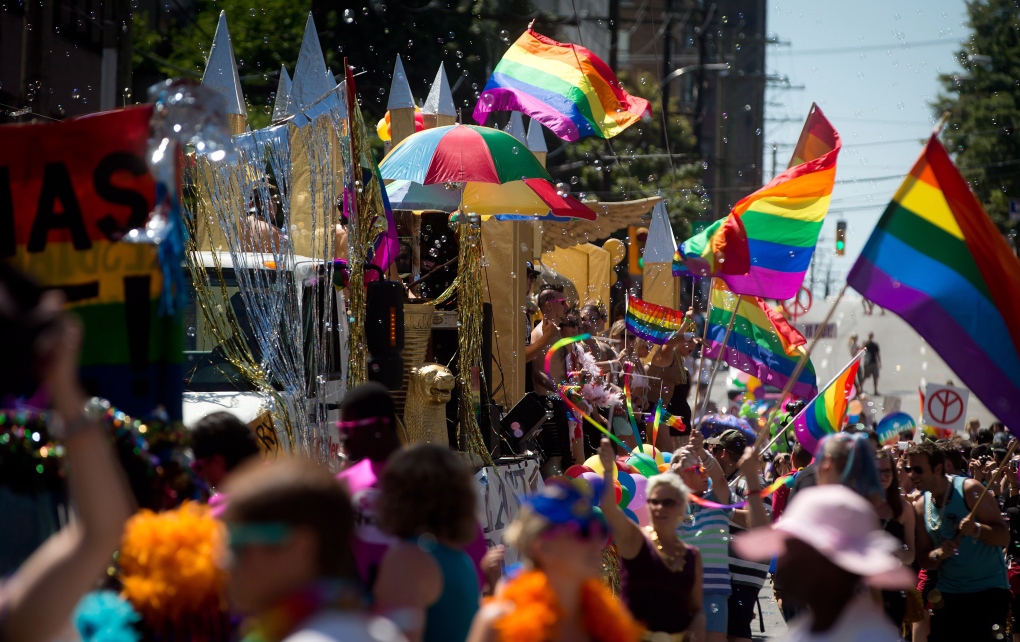 Vancouver’s historically gay neighbourhood was a safe space in which he could grow and become comfortable with himself and his sexuality, and it still feels like home to him today.

Steck has worked in promotions and marketing for Celebrities Nightclub for six years, but he’s been coming to Davie Street for business and pleasure for more than 20. In that time, he’s had a front-row seat to the many changes that have taken place in the neighbourhood.

In the past, the neighbourhood served as an “information booth” for the LGBTQ community, Steck said. But as technology has improved and society’s acceptance of homosexuality has increased, the need for Davie Street as a community hub has decreased, he said.

“You can pick up an app and figure out what gay people are within feet,” Steck said. “In that sense, I can see why the ‘gayborhood’ need is slowly, and sadly, diminishing.”

There Goes the Gayborhood?

Based on demographic data and interviews with residents of historically gay neighbourhoods in cities throughout the United States, Ghaziani’s book goes beyond simply identifying that the neighbourhoods are changing and attempts to determine why that is and what it means.

The more interesting question, he said, is what residents of those neighbourhoods think of the changes, and what that might mean for the neighbourhoods’ future.

Ghaziani said the responses he received when researching the book fell across a wide sectrum of opinion.

Some residents saw the changes as the death of the gayborhood and all of the benefits it provides as a centre for the community. Others expressed an ambivalent, “post-gay” attitude that de-emphasizes the importance of sexual orientation in people’s identities, and of differentiating between gay and straight spaces. Still others saw the changes as a net positive -- a signal that the struggle for equality for gays and lesbians has been successful.

Steck’s perspective has elements from both ends of the spectrum. He said the increasing diversity of the neighbourhood -- with more straight residents and fewer gay-centric businesses -- is a “repercussion” of the progress the LGBTQ community has made. While he’d like to see the gayborhood stay the way it is, he thinks the changes are a great reflection of this progress.

“A lot of my gay clientele are now hanging out in the straight bars on Granville Street,” Steck said. “At the same time that it was a sad thing to see, it was a great thing to see, because they’re now feeling comfortable in other bars.”

The American gayborhoods Ghaziani studied are experiencing the same shift. He said many of the people he spoke to said things like, “All of San Francisco is the Castro District,” meaning the whole city is accepting of gays and lesbians.

This point is underscored by the fact that same-sex households are now found in 93 per cent of U.S. counties, an all-time high.

Though gays and lesbians increasingly feel they can -- and do -- live wherever they want, there are still reasons to be concerned about the “straightening” of gay neighbourhoods, Ghaziani said.

Some of those reasons are political. A gay neighbourhood is also a gay voting bloc, which can ensure that its elected representatives pay attention to gay issues, Ghaziani said. Even in a nation like Canada, where same-sex marriage is legal on a federal level and discrimination based on sexual orientation is prohibited under human rights laws, there’s still political power in a geographically based gay community, he said.

“Has racism gone away? Or sexism?” Ghaziani said. “Homophobia is going to linger for a little while.”

There are also historical and cultural reasons to preserve gay neighbourhoods. Doing so show’s a city’s commitment to diversity and can create a tourist attraction, Ghaziani said. It also acknowledges the history of struggle gay neighbourhoods have seen. The pride parade wouldn’t be the same if it didn’t march past the AIDS memorial in the West End, Steck said.

Institutions like pride, Qmunity, and Little Sister’s bookstore help preserve the character of gay neighbourhoods simply by being located in them, Ghaziani said. They “root” communities to a particular space.

Similarly, civic commemoration of a neighbourhood’s gay history, whether in the form of monuments, murals, or -- in Vancouver’s case -- rainbow-painted crosswalks, helps signal the neighbourhood’s identity to outsiders, he said.

“What’s nice about this is that these types of urban interventions do not require us to deny the reality of demographic change,” Ghaziani said. “They’re cultural markers.”

For Steck, the changes on Davie Street just mean the gay community might have to work a little harder to keep the neighbourhood’s identity intact. He said he’s not worried about the neighbourhood’s future. If nothing else, the rainbow crosswalks will continue to be the iconic symbol of his home for years to come.

“It’s going to take a little while for that paint to wear off,” he said.