Swastika painted next to Jewish man's car in Kelowna, B.C.

An osteopathic practitioner in Kelowna says he's been targeted for his Jewish heritage before, but that didn't make what happened on Wednesday any easier.

Michael, who asked CTV News Vancouver not to use his last name or image because of concerns for his safety, had just finished work at his West Kelowna clinic and was loading his things into the back seat of his car when he noticed the swastika painted on the pavement behind the vehicle.

The discovery was upsetting.

"(It was) fear and anger, but mainly fear, because I'm a child of Holocaust survivors," Michael said of his reaction.

"I was raised with the knowledge, the education and the details of what my parents went through in the work camps and all my aunts, uncles and grandparents being transported, gassed and cremated."

Michael, who describes himself as modern orthodox Jewish, remembers being physically attacked for his religious identity as a child growing up in Montreal.

He moved to Kelowna from Montreal last year, and said he's had almost entirely positive experiences in the B.C. city.

He said his co-workers and clients have been "very supportive and respectful" of his faith, but in the moment after seeing the Nazi symbol painted near his car, he couldn't help but feel like his visibly Jewish presentation had made him a target.

"At the clinic, besides wearing my scrubs, I openly wear my yarmulke," Michael said. "I don't hide my Judaism or my Jewish identity, as I don't believe I should in a free country like Canada."

He told CTV News he doesn't believe any of his clients or co-workers would have painted the swastika, but added that it seemed likely that the perpetrator would be someone familiar with his workplace and his routine.

After discovering the symbol, Michael called Kelowna RCMP, who are now investigating the incident. 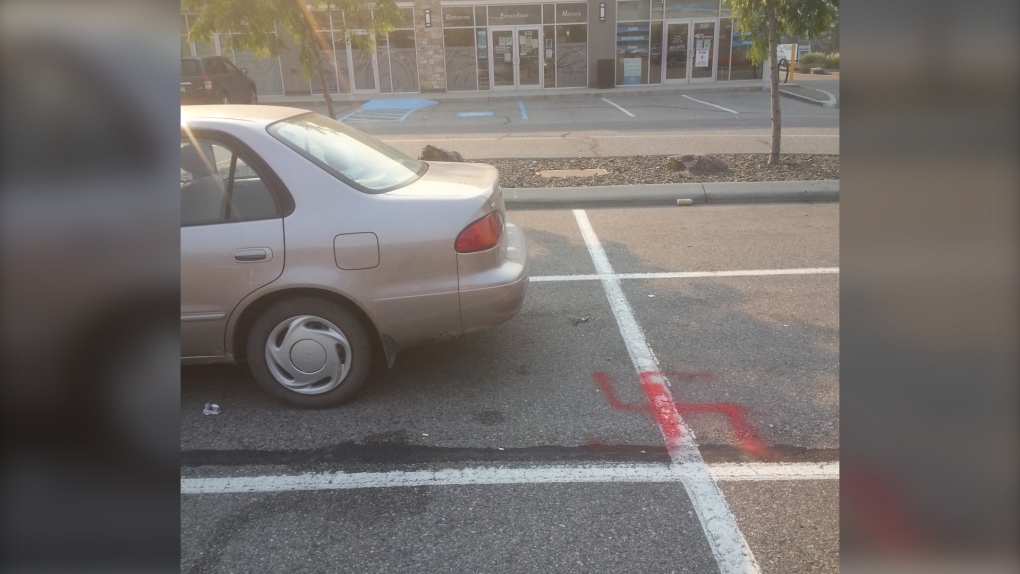 An osteopathic practitioner in Kelowna says he's been targeted for his Jewish heritage before, but that didn't make what happened on Wednesday any easier. (Submitted photo)

In a news release, Mounties asked anyone who saw suspicious activity in the parking lot where the swastika was painted - near Highway 97 and Leckie Road in West Kelowna - to get in touch with them. They're also appealing for any dash cam footage of the scene that may be available.

While he didn't discover the hateful graffiti until around 5:30 p.m., Michael says a colleague told him the symbol was already there by 11 a.m.

Police said they believe the swastika was drawn sometime during the morning, though the exact time isn't known.

“Racism of any kind has no place in our community and will not be tolerated," said Sgt. Joel Glen of West Kelowna RCMP, in the news release.

"We are conducting a fulsome investigation into this incident, and appeal to anyone who witnessed it to come forward.”

Though he worries that whoever painted the swastika in the parking lot might target him for further harassment, Michael said he felt it was important to share the experience and seek justice.

"If it goes unnoticed, it just breeds further ignorance, further hate, and just allows for this sort of thing to keep on happening," he said.