VANCOUVER -- A new study from the B.C. Centre for Disease Control found that a single shot of Pfizer or Moderna COVID-19 vaccines reduced the risk of infection in British Columbians 70 and older by about two-thirds.

The study, which was posted this week on the BCCDC website, and has not yet been peer reviewed, also found that protection was only slightly reduced when it came to two variants of concern, the alpha variant (also known as the B.1.1.7 and associated with the U.K.) and the gamma variant (or P.1, associated with Brazil).

“This is wonderful news and especially meaningful because this was protection that was provided during the peak of pandemic risk,” said Dr. Danuta Skowronski, the study’s lead author.

Skowronski, the BCCDC’s epidemiology lead of influenza and emerging respiratory pathogens, added that she was “thrilled” and “energized” by the findings, which she said likely underestimated the protection warded by a first dose.

The BCCDC collected 16,993 specimens from adults 70 and older living in the community in British Columbia, rather than in long-term care.

Researchers collected the samples during the peak of the spring 2021 wave, between April 1 and May 14.

“Such protection is particularly meaningful considering that it was provided during a period of peak pandemic risk, when (variants of concern) were predominantly contributing to the epidemic in BC,” wrote the study’s author, Dr. Danuta Skowronski.

Researchers found vaccine effectiveness was negligible for the first two weeks after a shot.

Skowronski pointed out that this appears to be the first study globally that broke out vaccine effectiveness on the gamma variant and said she was “heartened” by all the results.

Researchers did not examine the question of how long protection from a single dose of mRNA vaccine against COVID-19 infection might last. 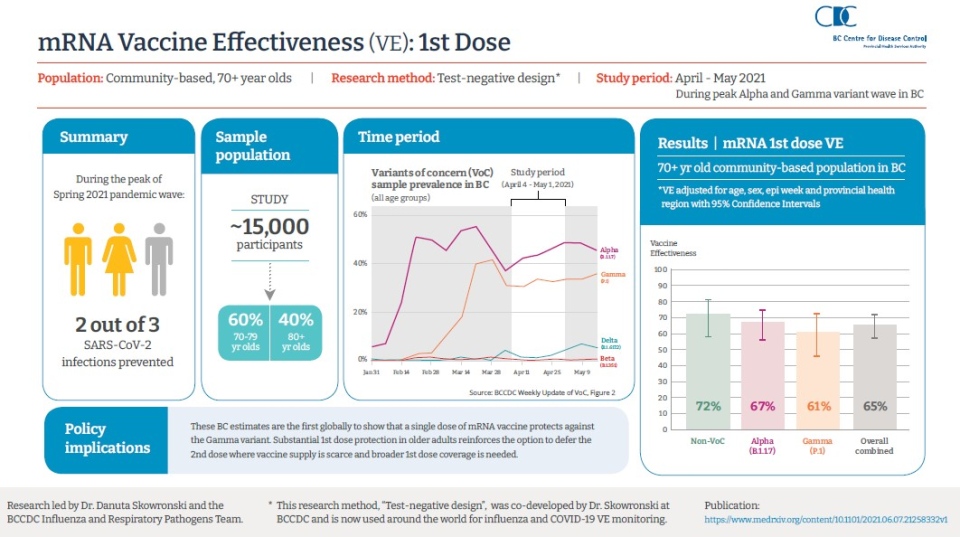 That work is ongoing, Skowronski added, as large numbers of British Columbians begin to receive their second doses.

“Will there be a new variant? Will the vaccines be very effective over time? And those are the things that keep me up at night,” said the BCCDC’s medical director, Mel Krajden.

Skowronski added the research will also help determine whether British Columbians will need a third, booster dose at some point.

But she pointed out the fact the province extended the gap between the first and second doses, originally up to four months, could have an intended positive benefit of “higher boost responses.”

“It’s not a done deal that we’re going to need a third, booster dose,” she said.

Popular B.C. tourist attractions including Butchart Gardens, PNE promised up to $1M from the province