BC Children’s Hospital is seeing a “surge storm” in young patients, prompting the facility to open an overflow unit for their emergency department.

CTV News has obtained an internal memo sent to all staff and care providers at BC Women’s and Children’s hospitals on Tuesday, advising them that they are now “triaging lower level acuity patients from the emergency department to a separate overflow area” in order to “manage the high volume of patients.”

The document describes the emergency department “mostly seeing viral illnesses, including Enterovirus/Rhinovirus, and now increasing presentations of influenza and RSV, as well as steady COVID-19.” It indicates that the hospitals expect to see even more sick children come through the doors.

Shortly after 10 a.m. Tuesday, the posted wait to be seen by a doctor at BC Children’s Hospital was 11 hours and 52 minutes.

As CTV News reported last week, pediatric surgeries are being cancelled and delayed as the scant ICU beds available for children recovering from life-improving or -saving procedures are occupied by youngsters struggling to breathe on their own due to serious respiratory illness.

Rachel Armstrong’s son, Jackson, is one of them. He’s been waiting for insertion of a mechanical valve into his aorta since May, with multiple tentative and confirmed surgery dates postponed in that time.

“This'll be (surgery) number 11 that we're waiting on now … They all know Jackson by name. We're no stranger to the hospital,” she said, speaking to CTV News in the Abbotsford hotel where they’ve been staying for weeks.

They’ve been travelling to the Lower Mainland from Kamloops for the surgery and were so frustrated with the last cancellation, they are now going to the hospital weekly for checkups and to physically make themselves seen and heard.

“Every time (the surgery) gets re-booked, it keeps getting pushed back, so we're not even certain it's going to happen in December like they tell us.” 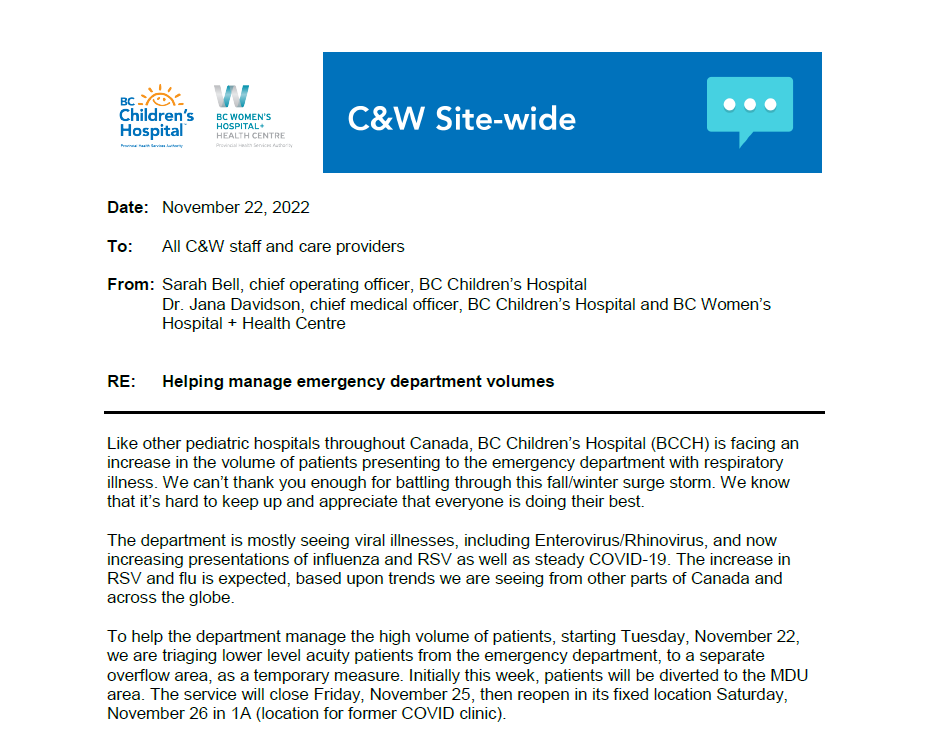 CTV News has obtained an internal memo sent to all staff and care providers at BC Women’s and Children’s hospitals on Tuesday.

The health minister refuses to say how many pediatric surgeries have been cancelled in British Columbia, but a pediatric cardiac surgeon at BCCH says he’s barely performed any non-emergency procedures in weeks, and he’s not the only surgeon breaking the news to anxious parents.

“There are definitely children that are being impacted,” said Dr. Sanjiv Gandhi at a press conference with the BC Green Party last week.

“I can tell you that plenty of mine have been. It's been routine that my cases have been cancelled over the past several weeks.”

Worried parents have told CTV News that they understand hospitals are struggling, but poor communication from hospital officials is only adding to their stress.

“There are so many families waiting right now and nobody has answers and everyone's waiting and feeling a lot of uncertainty,” agreed Armstrong. “We just want to know answers (about what to expect) and what they're going to do for all of the families, for all of us.”

Hyundai cars in Canada don't have the same anti-theft issue compared to those in the United States, a company spokesperson says, following reports that two American auto insurers are refusing to write policies for older models.

Canadian study suggests we may be underestimating children’s memory capabilities

New research from York University suggests that we may be underestimating what kids are capable of when it comes to their memories.