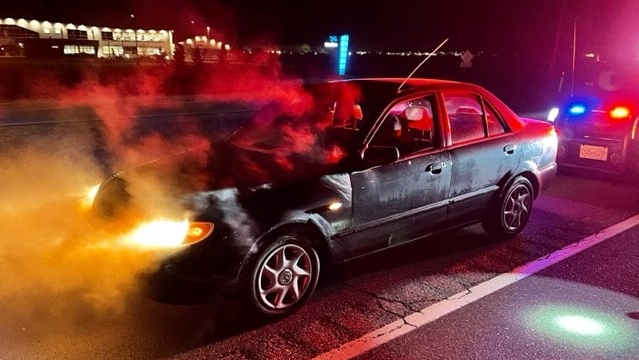 Police in Abbotsford say they pulled over a driver who was going more than twice the speed limit on Highway 1. (Abbotsford Police Department/Twitter)

A young driver's vehicle was seized over the weekend after they were caught going more than twice the speed limit on a highway through Abbotsford.

Police posted on social media Sunday saying a 20-year-old driver was caught going more than 200 km/h on Highway 1 near Sumas Way at about 2:40 a.m. that day. The speed limit in that area is 100 km/h.

According to police, the driver was going so fast, the car's engine blew.

The 20-year-old, who only had a novice, or 'N', licence is now facing charges of excessive speed, driving without consideration and failing to display an N. The car was also seized.

Fines and other penalties in B.C. are based on how much over the speed limit a person is driving, among other factors including whether they were in a school or construction zone.

Drivers with one or more ticket for excessive speeding pay a driver risk premium, which is based on convictions and reviewed in three-year periods.