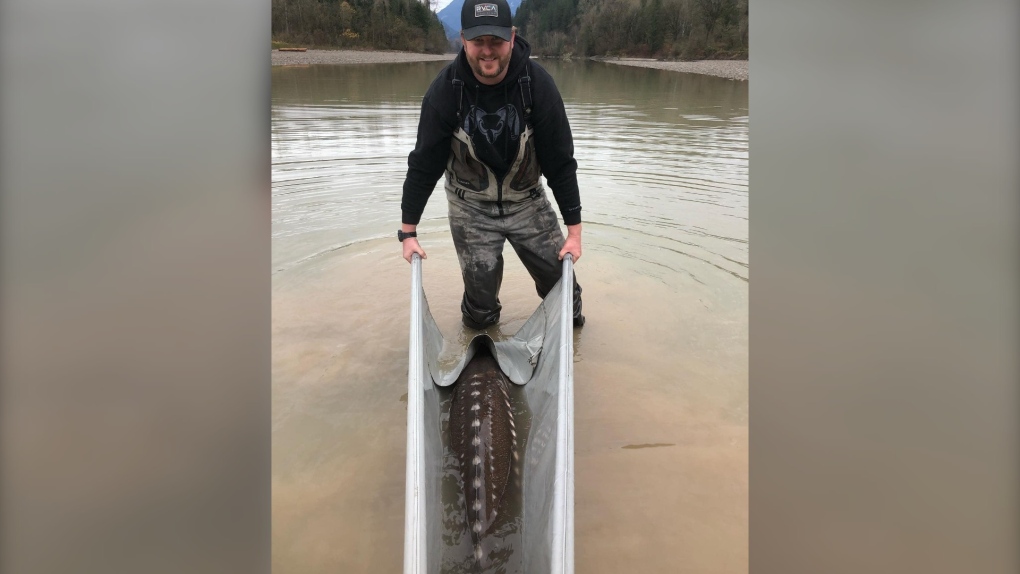 A pair of fishing guides are being credited for their work saving an endangered sturgeon trapped by the catastrophic floodwaters in B.C.'s Fraser Valley (Fraser Valley Angling Guides Association).
VANCOUVER -

A pair of fishing guides are being credited for their work saving an endangered sturgeon trapped by the catastrophic floodwaters in B.C.'s Fraser Valley.

Sarah Schreier, the executive director of the Fraser River Sturgeon Conservation Society, says professional fishing guides Tyler Buck and Jay Gibson have been helping out on the frontlines of the natural disaster.

Buck and Gibson, who are both members of the Fraser Valley Angling Guides Association, shifted their focus to conserving fish stocks and cleaning up riverbeds when the atmospheric river brought heavy floods to the area.

“They’ve been doing a great job and even took a moment to help a really large sturgeon along the way and help sturgeon conservation as well,” Schreier tells CTV News Vancouver. “It’s pretty amazing.”

When the storm hit, the large sturgeon became trapped in a side channel near Herrling Island, which is just outside of Agassiz.

When the guides discovered the fish, it was stuck in only about 20 centimetres of water.

“It could easily be a few hundred pounds and they carried it in a sling for two kilometres to return it to the main part of the Fraser River,” Schreier says. “So this was no small feat to do this.”

Schreier adds that this particular sturgeon had been tagged by the conservation society in 2008 and they have now decided to name it “Lucky.”

“This fish has another chance thanks to the guys helping it out,” she says. “It’s probably in its 20s or 30s…These are the fish that give us hope for the future. So it means a lot that they did this.”

According to the Fraser River Sturgeon Conservation Society, sturgeons are hardwired to survive. But it’s unlikely that this fish would have survived had mankind not intervened.

“What really impacts them is the food supply. So with an event like this, the impact to the habitat they use, where their food grows…so impact to survival would be potentially pretty significant just because of the impact of the habitats that they’re accustomed to finding their food,” Schreier says.

The conservation society has now adopted the sturgeon on behalf of Buck and Gibson, and their names will now be associated with the fish and its tagging information in their database.

“Hopefully the fish continues to be seen and encountered by our volunteers for years to come,” Schreier says.