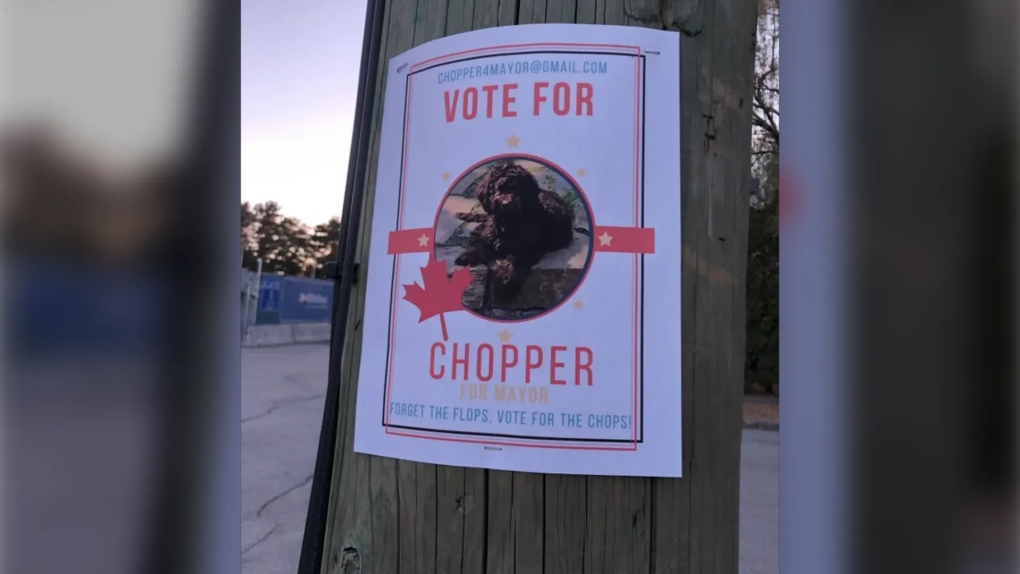 With just over a week to go until the Oct. 15 municipal election, the race is heating up. Especially for one New Westminster dog looking to fetch some votes after launching a mayoral campaign last month (Photo: bloodeagle231/Reddit).

With just over a week to go until the Oct. 15 municipal election, the race is heating up. Especially for one New Westminster dog looking to fetch some votes after launching a mayoral campaign last month.

According to his owner Andrew Riddell, Chopper brings a lot to the table.

"He feels like his canine population isn't properly represented, so he's come up with a whole bunch of great ideas," Riddell tells CTV News.

Those ideas include creating more green spaces, particularly dog parks. Chopper also hopes to encourage people to drive less often and get out for more walks in order to reduce carbon emissions.

Riddell says he and his 12-year-old daughter Amelia decided one morning that the two-year-old Bernedoodle would be the top dog for the job of mayor.

"I came up with the idea but she ran with it," Riddell says. "She's really good at making videos and posters."

The father and daughter quickly got to work creating posters and put them up around the community. They even created a YouTube channel for Chopper, with his own email address for potential voters to get in touch.

In one of the videos, the paw-litician describes his interests, which include naps, long walks and snow days.

A doggy door won't be installed in the New Westminster mayor's office quite yet, as Chopper's name won't be on the official ballot. Regardless, Riddell hopes his dog’s campaign helps to spread awareness.

"I hope it makes people think more about voting and maybe to put more effort into seeing who's running," he says. "Although it's hard to compare obviously to Chopper."

Since launching the campaign, Riddell says Chopper has been getting some looks when they go for walks.

"We get recognized as we're walking down the street," he says. "Even young kids know he's running for mayor and they're like: 'There's that mayor dog!'…it's fun."

A judge has acquitted Maj.-Gen. Dany Fortin of sexual assault over an allegation that dates back to 1988. The allegation stemmed from his time at the military college in St-Jean-sur-Richelieu, Que., which the complainant also attended.

'Doesn't line up': MPs challenge minister over instances of MAID offered to veterans

Veterans Affairs Minister Lawrence MacAulay was challenged by MPs on Monday about how the federal government is handling the growing number of veterans who've reported being offered medical assistance in dying.

Just days after introducing her first bill as Alberta’s premier, Danielle Smith says she is prepared to make changes after widespread criticism that the legislation grants unchecked power.

Prince Harry said the royal household regularly leak stories about each other, calling it 'a dirty game' in a new trailer released on Monday for the much-anticipated Netflix documentary series about him and his wife Meghan.

An Alberta mother is recounting her experience arriving at a packed children's hospital when her young daughter was in dire need of help.

Prime Minister Justin Trudeau says he is listening to concerns that some of the firearms his government is looking to ban are in fact used more for hunting.

Hundreds of people gathered on Sunday night to honour four Indigenous women believed to have been murdered by an alleged serial killer.

Prime Minister Justin Trudeau and Ontario Premier Doug Fourd were in in Ingersoll, Ont. Monday to make an announcement about electrical vehicle manufacturing.