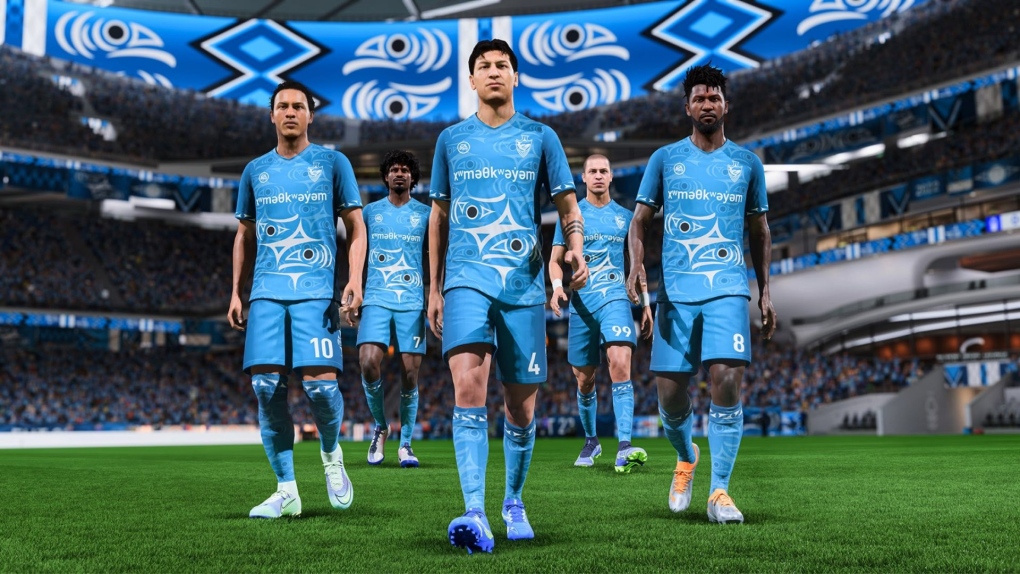 FIFA 23, developed primarily in EA Vancouver, recognizes the history, heritage and culture of the Musqueam Indian Band by including artwork and assets from Musqueam artists in its new edition. (EA Sports)

The hit EA Sports FIFA video game has gone back to its roots with its new edition, literally.

FIFA 23, developed primarily in EA Vancouver, recognizes the history, heritage and culture of the Musqueam Indian Band by including artwork and assets from Musqueam artists in its new edition.

Vancouver is located on the ancestral and unceded territory of the Musqueam, Squamish and Tsleil-Waututh nations.

There are more than 1,300 Musqueam band members. About half live in a small portion of its ancestral territory known as Musqueam Reserve, located south of Marine Drive in Vancouver near the airport.

Musqueam Chief Wayne Sparrow was blown away when he saw the results of the collaboration with EA Sports.

“Amazing. I'm really proud of our artists, our community,” he said in an interview. “To have it presented like that is just amazing. To me, it's a big step in reconciliation.”

The work of some 10 local artists is featured in the game.

“When I looked at it, it gets a little bit emotional,” said Sparrow. “All the hard work that our ancestors did in the past about being recognized in our area, some of the fights that they've had with the residential schools, the rights of Indigenous people that are accepted in the UNDRIP (United Nations Declaration on the Rights of Indigenous Peoples) and stuff like that.

“The only thing that upsets me is I wish that those ones that fought hard for us, that have all left us, aren't here to see what has come out of their hard work. Because it's not necessarily the leadership of this day. It's all those past leaders that set that groundwork for us.”

FIFA 23 players will have the opportunity to play on a fictional representation of Musqueam's real-life soccer field. Completed in 2015, the band's sporting facilities - a legacy of the 2010 Olympics - consist of two full-sized soccer fields and a clubhouse. The Musqueam Field is in the game as a playable pitch in the Volta Football mode, a take on street soccer.

Gamers will be able to unlock Volta Football apparel and FIFA Ultimate Team (FUT) kits, designed by Musqueam artists, along with FUT stadium customization elements that feature a variety of Musqueam motifs and patterns.

While EA Sports' Madden NFL franchise has collaborated with Indigenous artists in the past (Hawai'i stadium in Madden 22), the developer says this is a first collaboration of this kind for the FIFA title “as we aim to better connect with the local communities where our studios are located and our games are produced.”

“We are honoured to work with Musqueam artists, athletes, and community leaders to help share their deep and meaningful history and culture with the millions of FIFA fans across the world,” Nicholas Lammie, director of brand marketing at EA Sports FIFA, said in a statement.

The artwork was reviewed by a committee of representatives designated by the Musqueam Indian Band, EA Sports and Monday Creative, a Vancouver-based marketing company.

The collaboration also sees EA Sports helping the Musqueam on its own turf by creating real kit for Musqueam soccer players that bring to life the in-game outfits. It is also providing upgrades to the Musqueam Field including improved storage and equipment management facilities, new goals and nets, and custom tents to shelter from inclement weather.

“It's a huge sport here in Musqueam,” said Sparrow.

This report by The Canadian Press was first published Sept. 24, 2022.