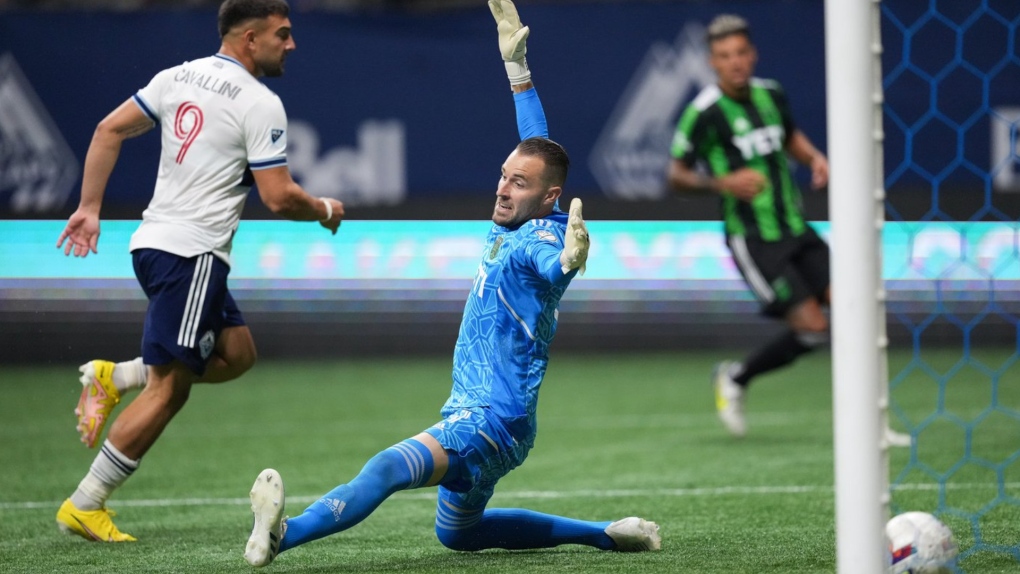 Vancouver Whitecaps' Lucas Cavallini (9) scores against Austin FC goalkeeper Brad Stuver during the second half of an MLS soccer game in Vancouver, on Saturday, October 1, 2022. THE CANADIAN PRESS/Darryl Dyck
Vancouver -

For the second year in a row, the Vancouver Whitecaps will head into their final game of the regular season sitting on the playoff bubble.

“I just think anything can happen towards the end of the season,” he said Saturday after the 'Caps recorded a crucial 2-0 victory over Austin FC.

“A lot of teams tend to lose a lot of important points and that's where we need to come in and just prove everybody wrong and be the underdog here and hopefully show a surprise.”

The result extended Vancouver's win streak to three straight and kept its faint hopes of securing a playoff spot alive - at least temporarily.

The Whitecaps (12-14-7) got some help on the out-of-town scoreboard Saturday, with the San Jose Earthquakes topping Minnesota United 2-0 and the L.A. Galaxy battling Real Salt Lake to a 1-1 draw. Vancouver now sits two points and two spots outside of a post-season berth in Major League Soccer's ultra-tight Western Conference.

“You need to deserve luck, and we deserve luck now,” head coach Vanni Sartini said of the standings. “So that's what we did today, we called the favour from the football gods, only if we were able to play our game. And we did fantastically, so I'm really happy.”

Austin (16-10-7) controlled 69 per cent of the possession Saturday but it was Vancouver that dominated much of the play.

Ryan Gauld wreaked havoc on the visiting defenders from kickoff and repeatedly showed why he's the key piece in the Vancouver offence.

The Scottish attacking midfielder opened the scoring seven minutes in on a breakaway.

Pedro Vite lobbed him a ball along the sidelines and Gauld streaked deep into Austin territory, going one-on-one with Austin goalkeeper Brad Stuver and sending a left-footed shot past the goalkeeper to make it 1-0 with his eighth goal of the season.

Then, in the 40th minute, Gauld danced around several defenders and fired a shot from the top of the box, forcing Stuver to make a diving save.

Before the end of the half, Gauld and striker Brian White displayed some picturesque passing inside the penalty area and created a solid chance for Vancouver. Stuver made an awkward-looking manoeuvre to stop White's sliding shot from the middle of the box.

Gauld is one of the club's designated players for a reason but has struggled to stay healthy this season, dealing with a concussion, COVID-19 and other injuries, Sartini said.

“I don't think I offend anyone in our locker (room) if I say that Ryan is our best player,” he said. “Because that's the beautiful thing about Ryan, that he is a team player. He's a (designated player) that is always there and is also a team player and that's the reason why he's so decisive for us.”

Gauld said he spent a large part of the season feeling like he wasn't playing up to his own personal standards.

“Thankfully, the last couple of months things have improved,” he said. “I've been working hard to improve that and I've been putting in better performances and we've been getting better results.

“But it's totally down to a team thing - when the team plays better, we all play better individually.”

Gauld set up Vancouver's second strike of the night, too, sending a low rolling ball into the penalty area in the 62nd minute. Cavallini collected the pass and tapped it in from the top of the six-yard box for his team-leading ninth goal of the season.

The Canadian striker had come off the bench as a substitute for Brian White just three minutes before. He was also playing in his first game since Aug. 27 when he was handed a four-game suspension for stepping on the neck of a Nashville SC defender.

Austin's key pieces still managed to get their chances Saturday.

Sebastian Driussi nearly evened the score in first-half injury time with a shot from in tight, only to see it blocked by 'Caps defender Jake Nerwinski.

Driussi has 21 goals this season and is chasing Nashville's Hany Mukhtar (23) in the golden boot race.

Austin's Max Urruti sprinted into the Whitecaps' end in the 22nd minute and blasted a shot on net. Whitecaps goalkeeper Thomas Hasal popped up off the goal line and punched the ball out of harm's way.

Urruti has been trouble for the 'Caps before. The 31-year-old Argentine forward has nine goals against the 'Caps across his time with five different MLS teams (Austin, Portland, Dallas, Montreal and Houston).

Hasal made five saves to collect his fourth clean sheet of the MLS season Saturday.

The Whitecaps will wrap up their regular-season campaign on the road against Minnesota United on Oct. 9. In order to make the playoffs, Vancouver will need a win.

“Hopefully other results will go our way, but we still have one more final (game) in Minnesota,” Cavallini said. “It's not going to be easy, but we just have to worry about winning that game.”

FOOT NOTES: The game capped a three-game homestand where the Whitecaps chalked up three wins. Vancouver has won three straight games for the first time since August 2021, when they beat Austin on the road and captured home victories against Los Angeles FC and Real Salt Lake. An announced crowd of 19,292 took in the game at B.C. Place.

This report by The Canadian Press was first published Oct. 1, 2022.