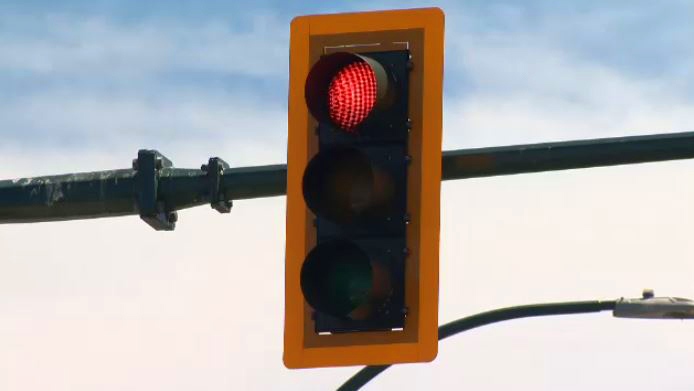 A B.C. driver who was found equally responsible after someone allegedly ran a red light and crashed into his pickup truck has been awarded nearly $8,000 in damages.

Christian Pedersen took his case to the province's small claims court after ICBC investigators were unable to determine who was to blame for the collision, instead finding both drivers 50 per cent liable.

The Civil Resolution Tribunal ultimately determined Pedersen was not responsible at all.

The crash happened on the morning of April 6, 2020, while Pedersen was driving his pickup down 122nd Street in Surrey. As he was passing through the 72nd Avenue intersection, a sedan driven by Gursimran Makkar slammed into the front corner of his truck.

The tribunal noted there were no witnesses to the crash, the intersection's traffic camera wasn't working at the time, and both drivers claimed to have the right-of-way.

"In the absence of any objective evidence about who had a green light, I find that this dispute turns on credibility," tribunal member Eric Regehr wrote.

"Part of assessing credibility is assessing whose account is more in harmony with what a practical and informed person would consider reasonably likely in the circumstances. In other words, whose account of the accident is more consistent with common human experience?"

The tribunal did consider evidence gathered from the black boxes recovered from both vehicles. ICBC had the contents analyzed by a forensic consultant, who found Pedersen's pickup had stopped at the intersection before slowly accelerating to 25 km/h at the time of the crash.

Makkar's car was determined to have been going approximately 60 km/h and "only began slowing half a second before impact," according to the tribunal's decision.

Regehr said the findings suggest Makkar, who was represented by an ICBC employee at the hearing, wasn't paying close attention to the road. He also found it unlikely that Pedersen would have run a red light after coming to a stop.

The tribunal member also noted that Makkar initially told ICBC he only "thought" the light had been green.

The tribunal ordered Makkar to pay $5,627 in damages for pain and suffering to Pederson, who suffered minor injuries in the crash, as well as $2,309 for accelerated deprecation of his pickup truck's value.

Pedersen also sought an order reversing the increase to his ICBC insurance premiums that resulted from the accident, but was denied. Regehr said the tribunal does not have "jurisdiction, or legal authority, to order ICBC to change a person's insurance premiums," and that the public insurer was also not a party to the dispute.

Candidates are making their final appeals to voters today ahead of tomorrow's federal election.

Female employees in the Kabul city government have been told to stay home, with work only allowed for those who cannot be replaced by men, the interim mayor of Afghanistan's capital said Sunday, detailing the latest restrictions on women by the new Taliban rulers.