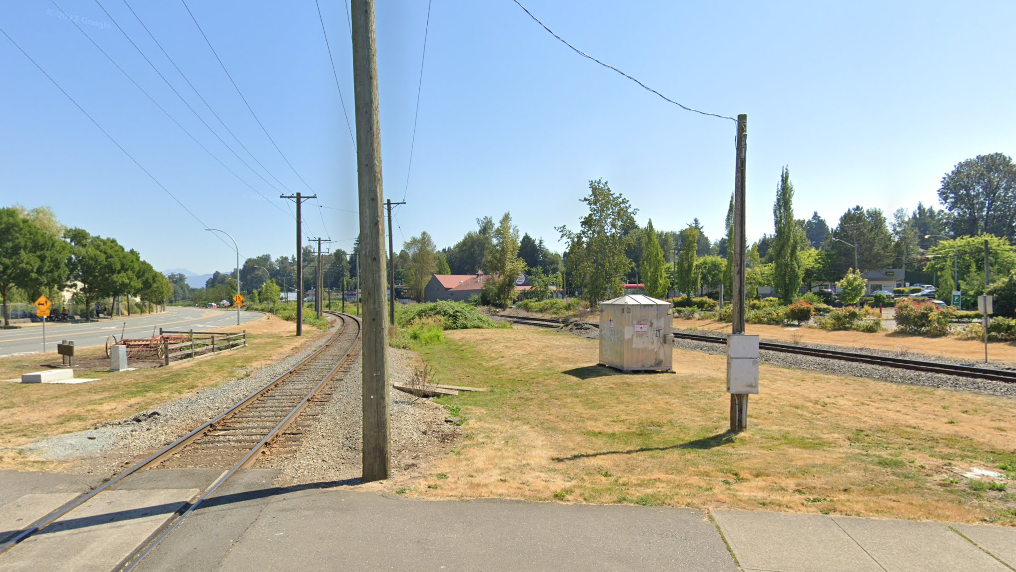 Railway tracks are seen at the intersection of Gladys and Essendene avenues in Abbotsford, B.C., in a Google Maps image captured in July 2022.

A 47-year-old man has been charged with attempted murder after he allegedly held someone in front of an approaching railcar in B.C.'s Fraser Valley this week.

Authorities said the victim was forced to stand on the tracks near the intersection of Gladys and Essendene avenues in Abbotsford late Tuesday night, as a self-propelled maintenance car barrelled toward him.

"The operator immediately applied his emergency brakes, bringing the railcar to a stop just short of the victim," the Abbotsford Police Department said in a news release.

"The victim, although shaken, was not injured."

Authorities said officers found a "non-compliant" suspect fleeing the area and arrested him.

One count of attempted murder has since been approved against Abbotsford resident Edward Mackenzie.

Both the suspect and victim are unhoused, and only knew each other in passing, according to police. Authorities have not released any information on what preceded the startling incident on Tuesday.

Sgt. Paul Walker described the railcar involved as a "track maintenance car, about the size of a single boxcar," and said the operator likely prevented a tragedy by stopping it in time.

"It would have killed the guy," Walker told CTV News.

Former President Jiang Zemin, who led China out of isolation after the army crushed the Tiananmen Square pro-democracy protests in 1989 and supported economic reforms that led to a decade of explosive growth, died Wednesday. He was 96.

Ten food trend predictions for 2023, according to Yelp

What trendy things will we be eating and drinking next year? Predictions for the top 10 food and beverage trends of 2023 were revealed recently by review site Yelp.