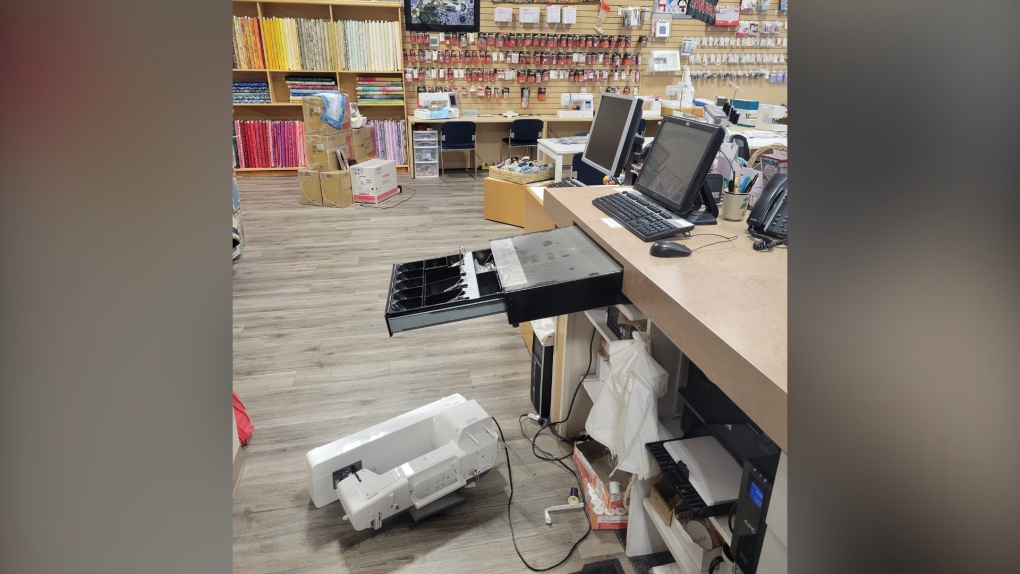 A photo posted to Facebook by Linda's Quilt Shoppe in Kelwona shows the aftermath of a reported break-in.

Police in Kelowna are appealing for witnesses and information after about a dozen high-end sewing machines were stolen from a small business in the city.

The Kelowna RCMP said, in a statement Monday, that officers were called to the store on McCurdy Road around 10:20 a.m. by the business owner who said he was alerted to the break-in by his neighbour who noticed the front door was "wide open."

Authorities say the value of the stolen machines ranges from $6,000 to $25,000 each and that the theft was partially captured on video.

"Surveillance showed a large rental van arrive at the business at approximately 12:30 a.m. with four males who gained entry through the front of the store. The males spent a significant amount of time removing the property before departing," the statement from the detachment says.

“This theft was significant and has caused serious financial pressure on this local business trying to survive during these difficult times,” he wrote in the news release.

While police did not identify the business, a social media post from Lina's Quilt Shoppe, which is on the block where the robbery occurred and describes itself as the "oldest and largest sewing machine store in the Okanagan Valley, reported a robbery Monday.

"We were broken into early today at the store and had a number of sewing machines stolen. Please if you of anyone selling sewing machines that are missing pieces (foot peddles, cords, feet, accessories) beware that they might be ours," the Facebook post says.