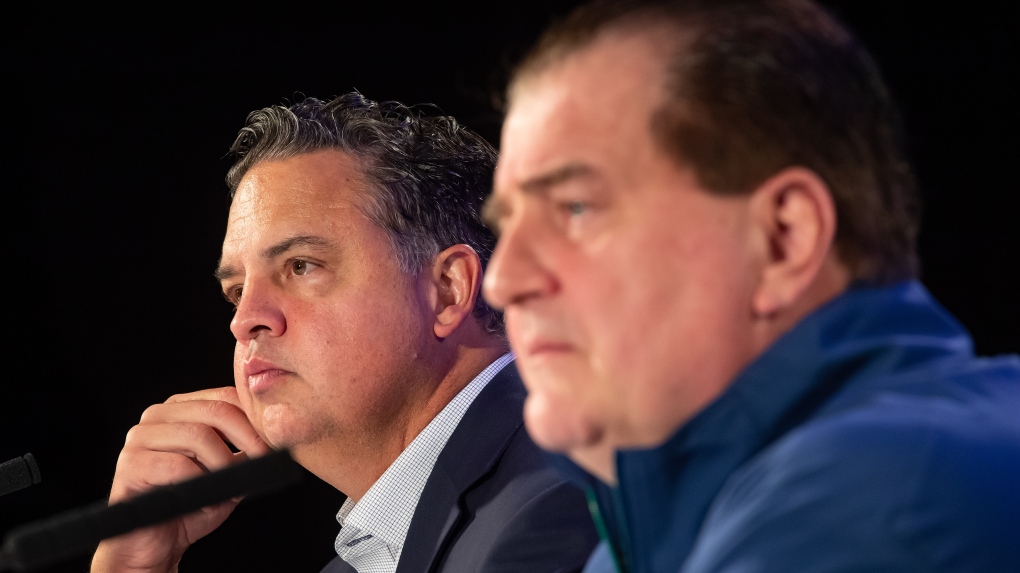 Green will reportedly be replaced with Bruce Boudreau, who has signed a two-year contract, according to TSN.

As of 8 p.m. Sunday night, the Canucks had not publicly confirmed the changes. A spokesperson for the team did not immediately respond to requests for comment.

The report comes after the Pittsburgh Penguins routed the Canucks 4-1 in Vancouver on Saturday night, drawing boos from the home crowd. The Canucks currently sit last in the Pacific Division with an 8-15-2 record.

Several of Vancouver's stars have struggled offensively and the club's special teams have floundered. The team has the worst penalty kill in the league (64.6 per cent) and has capitalized on 17.4 per cent of its power-play chances.

Green, 50, was in his fifth season behind the bench. He led the team to the playoffs once during his tenure.

Boudreau, 66, previously coached the Washington Capitals, Anaheim Ducks and Minnesota Wild. He won the Jack Adams Award as the NHL's top coach in 2007-08 when he was with the Capitals.

Green admitted that his team's dismal start was “trying,” and said it can be frustrating to not get results when you feel like you're playing well in certain parts of your game.

“You bang your head against the wall, you get up the next day and try to pick your team up a little bit. Also be stern with them in areas where you need to be stern and fix,” he said on Nov. 18. “From a coaching standpoint, you have to make sure you keep your emotions in check and get the right message across to your group.”

Green signed a two-year extension in May after Vancouver finished the 2020-21 campaign last in the seven-team all-Canadian North Division with a 23-29-4 record.

The 2020-21 season was a difficult one for Green and the Canucks both on and off the ice. Vancouver won just two games in February and suffered the NHL's worst COVID-19 outbreak at the end of March.

Twenty-one players and four coaches - including Green - tested positive for the virus and the Canucks' games were put on hold for more than two weeks.

The native of Castlegar, B.C., said it had been a difficult year but the experience had come with valuable lessons.

“I know over the years in Vancouver, I've improved every year and become a better coach every season. And this year's no different,” he said before the Canucks played the Winnipeg Jets on May 12.

“When you go through challenges and through adversity, sometimes you grow even more from those situations than when you're having success.”

Green was hired in April 2017 to replace Willie Desjardins who was fired when the team missed the playoffs two years in a row.

Under his leadership, Vancouver saw slow, steady progress, making the play-in after posting a 36-27-6 record in the 2020 regular season.

The Canucks excelled in the Edmonton playoff bubble, ousting the Minnesota Wild and St. Louis Blues before being eliminated by the Vegas Golden Knights in a gritty seven-game series.

Expectations for this season were high, with general manager Jim Benning saying the Canucks didn't want to take a step backward.

A former NHL centre himself, Green said he knew continuing to progress wouldn't be easy.

“Winning doesn't just happen,” Green said in January 2021. “You've got to push, you've got to be prepared, you've got to sacrifice, you've got to create a culture that's about winning. And I think (the Canucks are) on the right path to that. And we're going to continue to push our team in that direction.”

With files from Gemma Karstens-Smith of The Canadian Press