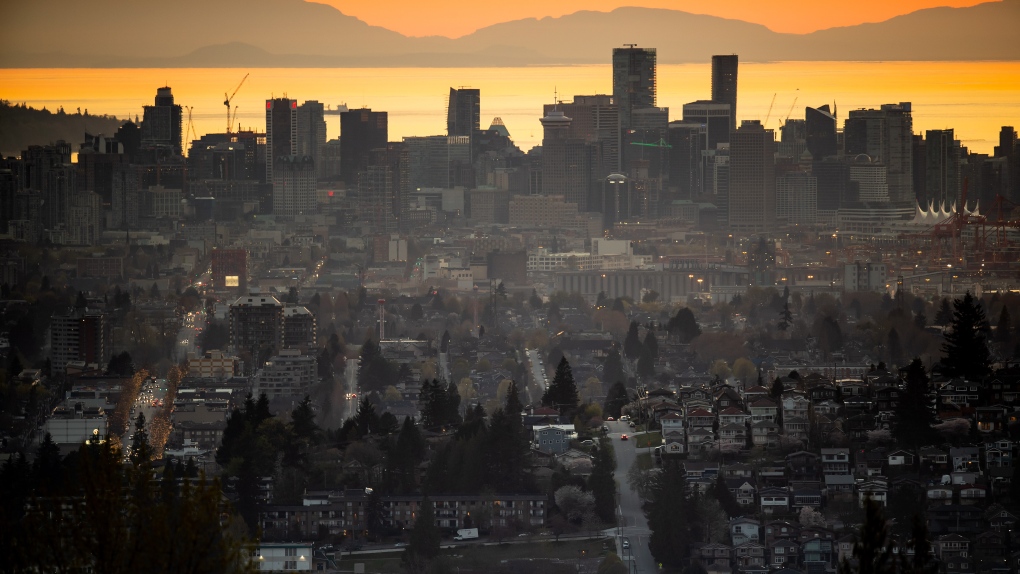 The downtown Vancouver skyline is seen at sunset, as houses line a hillside in Burnaby, B.C., on Saturday, April 17, 2021. (Darryl Dyck / THE CANADIAN PRESS)

Several heat warnings have been issued across B.C.'s South Coast, where a "short-lived" heat wave is expected to send temperatures soaring this week.

Environment and Climate Change Canada said a strong ridge of high pressure will push temperatures as high as 35 C inland and 27 C near the water on Wednesday and Thursday.

Temperatures are then expected to "moderate" on Friday, according to the heat warnings for Metro Vancouver, the Fraser Valley, the Sunshine Coast and Howe Sound.

Additional warnings have also been issued for parts of Vancouver Island and further up the coast, as well as the Fraser Canyon and Thompson regions.

ECCC urged the public to be careful during periods of hot weather, which can pose risks to anyone but are of particular concern to younger children, older adults, pregnant people, those with chronic illnesses, and anyone working or exercising outdoors.

"Watch for the effects of heat illness: swelling, rash, cramps, fainting, heat exhaustion, heat stroke and the worsening of some health conditions," the agency said.

The record-breaking heat wave that arrived in late July and continued into early August is believed to have caused 16 heat-related deaths across the province, according to preliminary data from the B.C. Coroners Service.

Most of the people who died between July 26 and Aug. 3 were seniors, but officials said two people suspected of succumbing to the heat were in their 40s.

The temperatures didn’t reach the highs recorded during last year's devastating heat dome, which saw the Village of Lytton break the country's all-time temperature record before being all but wiped out by a wildfire.

A death panel review released by the B.C. Coroners Service in June determined a staggering 619 lives were lost to extreme heat last year in the province, and that nearly all the deaths occurred indoors.

Ukraine's former ambassador to Canada says Russia could use so-called referendums in his country to conscript Ukrainians.