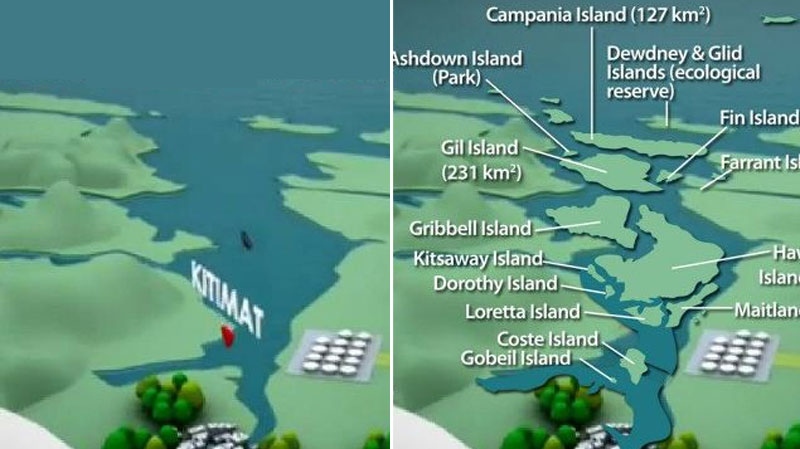 The Douglas Channel as seen in an Enbridge ad, left, and a comparison image created by graphic designer Lori Waters. (Facebook)

VICTORIA -- About 1,000 square kilometres of islands have disappeared from Douglas Channel in an animated depiction of Enbridge Inc.'s proposed Northern Gateway pipeline and tanker route.

The project would send bitumen by pipeline from Alberta's oilsands to Kitimat, where it would be loaded onto tankers for export to Asia.

A video on the Enbridge website shows Douglas Channel as a wide open funnel leading from Kitimat to the Pacific, omitting the narrow channels, islands and rocky outcrops that make up the potential tanker access route.

The view of Douglas Channel sprang to public attention after Lori Waters, a Vancouver Island researcher and owner of a biomedical communications company, created overlays and maps showing the real Douglas Channel and posted the images on Facebook.

Reaction against Enbridge - which is fighting an image problem because of recent pipeline spills - was swift.

"These images are disturbing enough to make me no longer trust anything coming from Enbridge. It's utterly shameful," he said.

However, Enbridge said the video is an obvious animation and contains a disclaimer that says it is "broadly representational."

"That video is meant to be for illustrative purposes only. It's not meant to be to scale. It's meant to illustrate the pipeline route, not the marine aspects of the operation," said Enbridge spokesman Todd Nogier.

"There's a disclaimer at the end because it's really clear this is meant to be illustrative," he said.

The video is meant to be pleasing to the eye, but viewers would not mistake it for a detailed map, Nogier said.

A tanker safety video showing Douglas Channel in detail and to scale, together with technical reports on every aspect of the marine route, are on the Enbridge website, he said.

"If they are trying to conclude that we are trying to mislead people, nothing could be further from the truth. There's lots of information there. It's all there and it's all for public viewing," Nogier said.

However, groups opposed to the proposed pipeline and tanker project believe the video is an attempt to mislead.

The Enbridge view of Douglas Channel would make anyone who knows the area chuckle, said Eric Swanson of the Dogwood Initiative.

"In reality, it's a twisting path through rocky islands and granite outcroppings, including 90 degree turns, but it's shown as a sparkly, open channel," he said.

"They are certainly painting a rosy picture of a very complicated and dangerous waterway."

"It's more hyper-positive imagery because they know they have a problem because of the spills," he said.

"That image really misrepresents the reality, which is that that channel is jam-packed with islands," Paterson said.

British Columbians should look at the images and decide how far they are willing to trust the company, regardless of what disclaimer they put on the video, Paterson said.

"A comparison of their images with the actual really raises questions about the trustworthiness of what they are telling people in B.C.," he said.