The number of COVID-19 cases and outbreaks in B.C. care homes continues to grow during the Omicron surge, but deaths in this wave remain less common than they were during previous ones.

In the latest report on outbreaks in long-term care, assisted-living and independent-living homes from the B.C. Centre for Disease Control - which captures data as of Tuesday morning - there were 45 active outbreaks in the province.

Of those outbreaks, eight had any deaths associated with them (18 per cent of the total).

That's an increase from the previous week's report, when there were 39 active outbreaks and only four of them had resulted in deaths (10 per cent of the total number of outbreaks).

However, this week's numbers are still a far cry from what they were in January 2021, when the BCCDC reported 51 active outbreaks and 33 with deaths associated (65 per cent).

A similar pattern holds when looking at the percentage of care home cases ending in death. This week's 45 outbreaks have a total of 891 cases associated with them, and the eight that have seen at least one resident die have seen a total of 18 deaths between them.

This means that, so far, 2 per cent of infections associated with active care home outbreaks in B.C. have resulted in death.

That's an increase from last week, when a total of seven deaths were associated with 724 cases, good for a death rate of just 1 per cent.

It's still much improved from January 2021, however, when there were 2,259 infections associated with active outbreaks, and 336 people had died, a death rate of nearly 15 per cent. 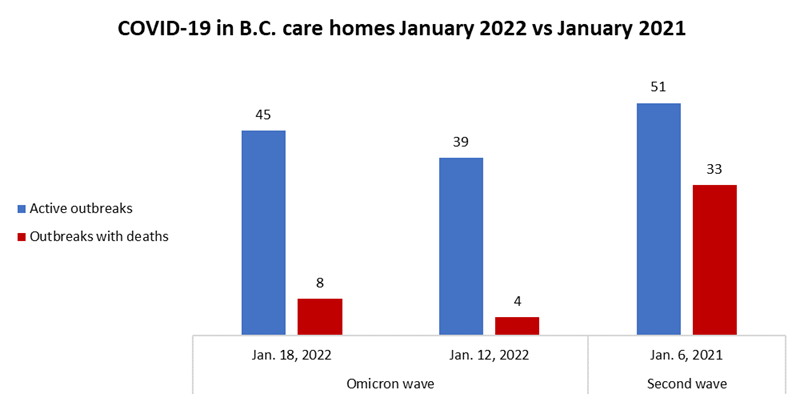 The number of active care home outbreaks in which residents have died for three specific dates, two from the Omicron wave and one from the second wave in January 2021. (Data from the BCCDC)

Total cases and deaths associated with active outbreaks in B.C. care homes for three specific dates, two during the Omicron wave and one during the second wave in January 2021. (Data from the BCCDC)

Obviously, a lot has changed over the last year. In early 2021, the province was still in the process of administering first and second doses of COVID-19 vaccines in care homes. The Alpha variant of concern was just starting to appear in B.C. and had not yet become the dominant strain of the coronavirus in the province.

Today, the vast majority of care home residents have received booster doses of vaccine, and the extremely contagious Omicron variant is generally causing milder illness in those who have been immunized.

Speaking to reporters during a news conference Friday morning, provincial health officer Dr. Bonnie Henry credited high uptake of booster shots among residents and staff in long-term care with "changing the balance" of precautions that are needed in long-term care homes.

"With the increase in transmission in our communities, we've also seen increases in cases and outbreaks in long-term care and assisted living among both residents and staff," Henry said. "For family members, for people who work and operate in long-term care and for our public health team, I know this is very concerning."

"Our focus continues to be to protect our elders and seniors who we know - and we've seen the data - are more vulnerable to severe illness, but also to balance that with ensuring our seniors have the care and the support they need," she added.

Henry did not specify what changes would be made to long-term care restrictions as the province begins to manage COVID-19 more like it manages the common cold.

Unlike colds and flus, the coronavirus remains dangerous enough to warrant the public health measures B.C. currently has in place, the provincial health officer said.

Last month, Henry introduced a public health order restricting visits at long-term care homes to essential visitors only. That rule does not apply to assisted-living facilities.

Portuguese authorities said on Wednesday they had identified five cases of rare monkeypox infection and Spain's health services are testing eight potential cases after Britain put Europe on alert for the virus.

The pathologist who conducted an autopsy on Chantel Moore says the 26-year-old Indigenous woman was shot twice in the chest, once in the abdomen and once in her left leg.

DEVELOPING | 'Somebody out there is missing this child': Remains of young girl found in water in Dunnville, Ont.

Women are almost twice as likely to be trapped in a car after a crash: study

A new study out of the United Kingdom has found that women are almost twice as likely as men to be trapped in a vehicle after a crash.