The demographic makeup of COVID-19 cases in British Columbia has shifted dramatically in recent weeks, with children under 10 years old now making up the biggest share of confirmed new infections in the province.

Since the first week of September, cases in that age group went from roughly 12 per day for every 100,000 people to 19 on Sept. 23, the highest per-capita infection rate of any age group, and the one skyrocketing as the others go down.

The analysis comes from one of the province’s most high-profile data analysts and a member of the B.C. COVID-19 modelling group, which is made up of independent scientists and researchers.

"It's the highest it's been and it still looks like it's rising,” said data scientist Jens von Bergmann. ”Right now, those under 10 years old are more getting infected than they ever have at any timeframe during this pandemic."

Von Bergmann notes that, although the sudden surge coincides with the start of school, there’s no guarantee that’s what’s driving the numbers. Still, with B.C. not requiring students in Kindergarten to Grade 3 to wear masks, he’s urging public health officials to prioritize analysis of the phenomenon.

"It is worrying, and kids are always an emotional topic for a lot of people, but because of that is really why we should pay close attention and why I'm hoping public health is hard at work right now to get to the bottom of this,” he said. “I hope they look at the data and see if some of those things like masks and if that's not effective enough then maybe add other things, too, than just expanding the mask mandate, like improved ventilation, for example."

Despite pediatricians across the United States warning that children are more susceptible to the ultra-contagious Delta variant, in part because they cannot be vaccinated, British Columbia’s public health and education leaders have maintained their plan for a “normal” school year that does not emphasize testing or improved ventilation, nor the cohorting and distancing it did by the end of the last school year.

"I think it's something we need to watch carefully,” said Dr. Laura Sauve, an infectious disease pediatrician at BC Children’s Hospital.

“We saw similar rises last year that then settled out … Our public health colleagues are going to be watching closely to decide if there's any actions they need to take."

She pointed out that pediatricians and hospitalists are seeing a rise in cold, flu and RSV cases in the emergency department, but they haven’t observed a significant increase in COVID-19 hospitalizations there.

"I think it is a good idea to get tested if you have symptoms," said Sauve. “It's helpful to know when kids don't have COVID too, and it's important to stay home when we're sick right now, whether we have COVID or another virus."

But COVID-19 itself is undoubtedly spreading. A Surrey family recently shared their experience with delayed contact tracing and notifications, and another family contacted CTV News, alarmed that close contacts who were vaccinated were not told to self-isolate and that children from a number of schools were showing symptoms but hadn’t been contacted by Fraser Health.

CTV News has verified that the mother and daughter tested positive for COVID-19. They say some of their close contacts who are displaying symptoms are having trouble accessing the limited testing available in the community; the family has conducted a contact tracing exercise of their own, with a friend sketching out the network of possible exposures and infections that could involve several schools. 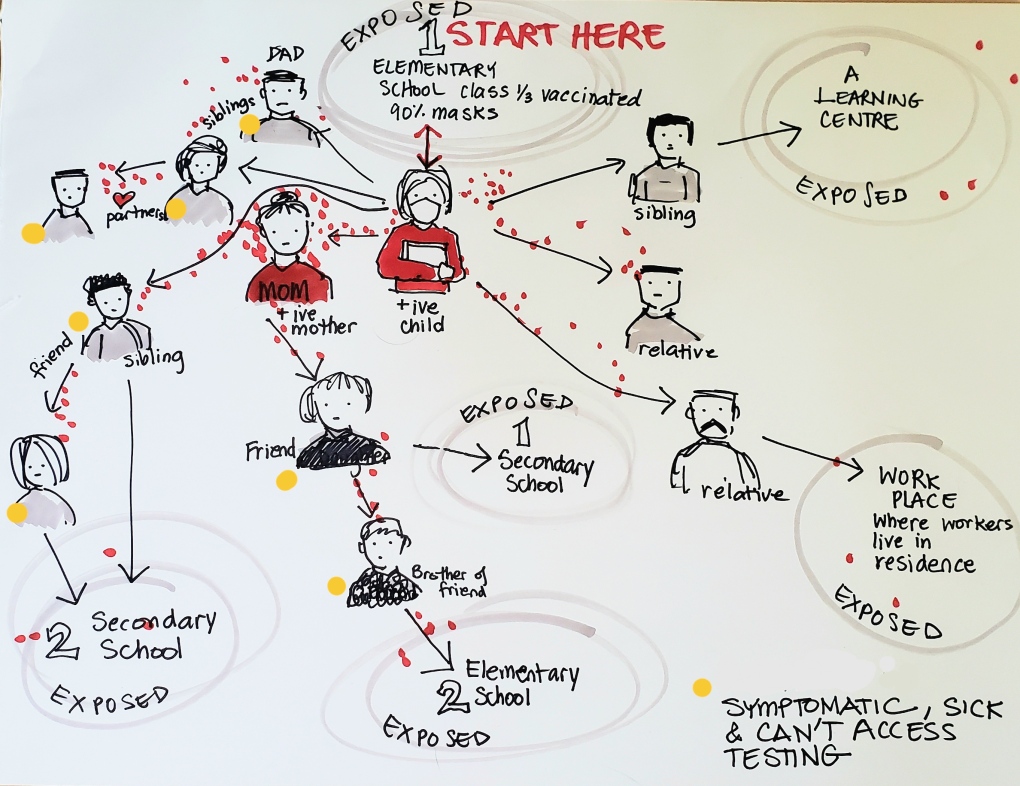 “The health authority emailed me a generic self-isolation notice to forward to our contacts myself,” said the mother, who believes her daughter caught COVID-19 at school and doesn’t wish to be identified.

“Because it is coming from me rather than directly from the health authority, our contacts are unsure of how long to isolate for, as I am just a mom, not an authoritative source on isolation protocols.”

A grassroots movement to document COVID-19 exposure notices in schools by a Richmond parent has already recorded more than 200 exposure notices to local schools, and the list is growing rapidly.

While few children have required intensive care for COVID-19, a newborn recently spent an indeterminate amount of time in the ICU before being discharged, and a 10-to-12-year-old appears to still be there. On Friday, the health minister revealed a second minor under age 19 is currently in the ICU.

Sauve told CTV News the trend of one to two per cent of children with confirmed COVID-19 infections needing hospitalization has continued in British Columbia, even though the Delta variant had replaced all other strains of the coronavirus by July.

B.C. only allows testing for children with symptoms and isolates confirmed cases, but doesn’t routinely test classmates to proactively screen for more potential cases. With more of them testing positive regardless of what many experts describe as a low testing rate, there is growing concern.

Speaking on condition of anonymity, doctors of various stripes and positions expressed concern at the province’s laid-back approach to schools and warned that one or two per cent doesn’t sound like much, but with few pediatric care beds available at the best of times, the surging infection rate should be raising alarms with policymakers.

Sept. 25: This story has been updated from a previous version to correct the age range of the second minor currently in ICU. The minor is under the age of 19.