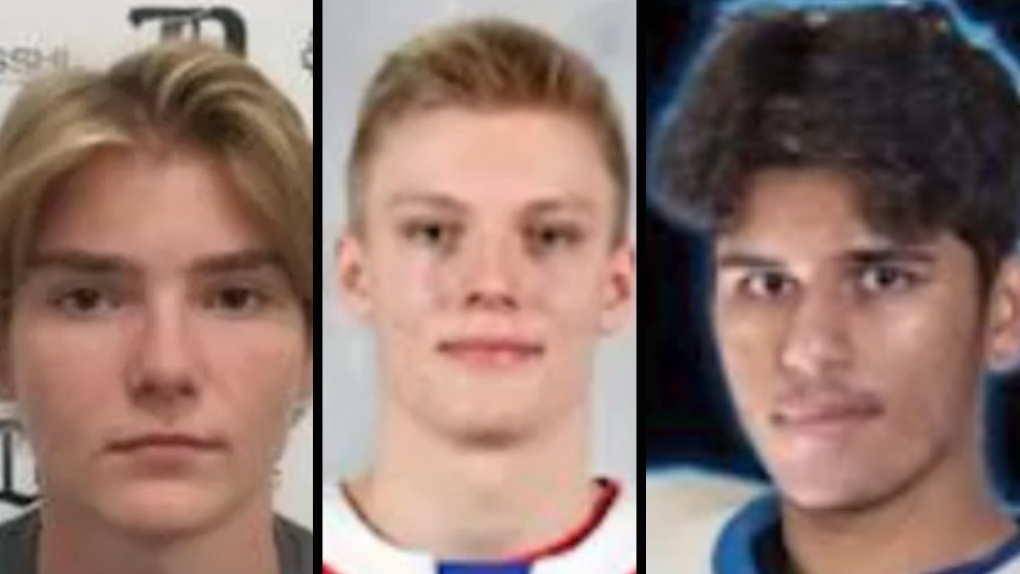 The deaths of 17-year-old Parker Magnuson, 16-year-old Caleb Reimer and 16-year-old Ronin Sharma left the hockey community reeling, drawing condolences from the NHL, the Humboldt Broncos and many others.

A coroner's investigation found Magnuson was driving the other teenagers through Surrey in a Ford Focus RS when the car crossed the centre line on 104 Avenue and crashed into a tree in the early morning hours of Aug. 21, 2021.

All three of the young friends died at the scene.

The car's onboard computer indicated it had "accelerated from 20 km/h reaching a record speed of 187 km/h seconds before impact," according to the report.

The stretch of 104 Avenue where the crash took place, between 160th Street and Fraser Glen Drive, has a posted speed limit of 50 km/h that dips to 30 km/h along a bend in the road.

The report said the Ford Focus "failed to navigate the northbound curve" before the collision, and that the weather was clear and the road was dry at the time.

Toxicology tests for Manguson found he had been drinking that night. The B.C. Coroners Service noted the teenager had no record of driving prohibitions or licence suspensions.

The three deaths were ruled as accidental, and the result of blunt force trauma.

Sharma played for the Langley Rivermen, and was described by his coach as a natural leader both on and off the ice.

Weeks after the tragedy, when the team was warming up for their season opener, every player took to the ice wearing Sharma's number, 25. The Rivermen then retired his jersey.

Reimer was signed with the Edmonton Oil Kings in 2019, and was described as one of several young breakout stars during the team’s 2020-21 Central Division Championship season.

Experts say Canada's plan to increase immigration may ease some pressures in the labour market, but bigger changes are needed to ensure new permanent residents are matched with the jobs that most need filling.

An Alberta First Nation is to sign an agreement today with Ottawa giving it the autonomy to administer its child welfare.

Fear of disappointment? This is why you should say 'no' more

Many people have a hard time saying 'no,' a psychologist says, but the reluctance to let others down has widespread mental health impacts.

'We're all Tyre': Family prepares to lay Nichols to rest

The family of Tyre Nichols plans to lay him to rest on Wednesday, three weeks after he died following a brutal beating by Memphis police after a traffic stop.

Tom Brady retires, insisting this time it's for good

Tom Brady, who won a record seven Super Bowls for New England and Tampa, has announced his retirement.