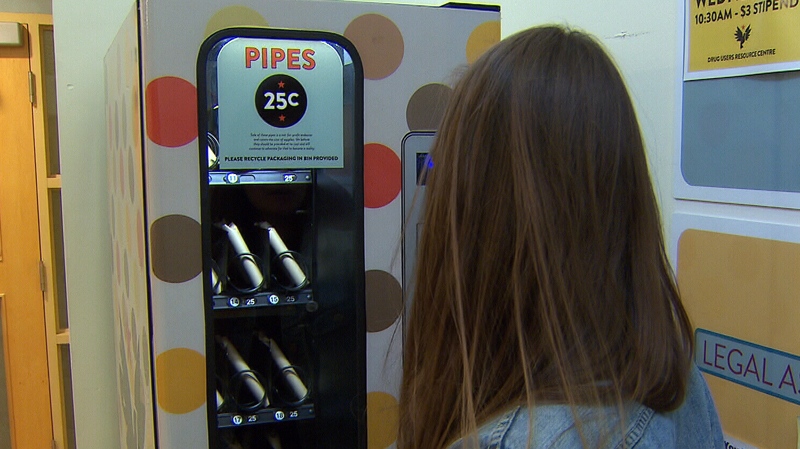 Kailin See, director of the Portland Hotel Society's Drug Users Resource Centre, shows one of the two crack pipe vending machines the organization has installed in Vancouver -- the first of their kind in Canada. Feb. 7, 2014.

A non-profit organization has installed the country’s first-ever crack pipe vending machines in Vancouver in a new bid to halt the spread of disease in the city’s Downtown Eastside.

The Portland Hotel Society has been operating two of the machines – which dispense Pyrex crack pipes in exchange for just $0.25 – in the Washington Market and the PHS’s Drug Users Resource Centre for the last six months.

“For us, this was about increasing access to safer inahalation supplies in the Downtown Eastside,” said Kailin See, director of the DURC.

Though many programs provide pipes for drug users in the neighbourhood, it’s usually on a one pipe per person per day basis, according to See. Vending machines allow addicts to purchase as many as they need, with each $0.25 per pipe barely covering production costs..

“They don’t run the risk of then sharing pipes, or pipes that are chipped or broken,” See said. “Everything from flu, colds, cold sores, HIV: If you cut your lip on a pipe that someone else has been using, there are risks there.”

Appearance-wise, the machines don’t look much different than a regular vending machine. Covered in colourful polka dots, the only indication these aren’t your run-of-the-mill snack machines is a blue sign at the top that reads “PIPES” in bold red lettering, and, of course, the pipes inside.

“It looks funny, and that’s kind of part of it,” See said. “It’s making this not look like a scary or stigmatized thing. This is a very important thing for the community and we thought we wanted to make it look really snazzy.”

But it’s not all fun and games – the society hopes the machines will spark a broader conversation about the positive benefits of harm reduction.

Mariner Janes, the manager of the PHS’ mobile needle exchange, said the concept took about a year-and-a-half of production until the machines were debuted.

So far, response from the DTES community has been positive.

“Through and through, the people that are using the machine and need the pipes are kind of in dire need of the supplies, and really it’s a health care kind of item,” he said. “The pipes on the streets themselves can get very expensive, just because they’re kind of scarce.”

See said the machine at the drug users centre routinely sells out every week.

But beyond the borders of Canada’s poorest postal code, reaction may not be so favourable.

The federal government has shown its disapproval of harm reduction measures when it tried to shut down Vancouver’s safe injection site, InSite, in 2008.

InSite survived thanks to a Supreme Court of Canada ruling that upheld the site’s exemption under the Controlled Drugs and Substances Act.

While the machines might only further the perception of the DTES as a community burdened by drug addictions and mental illnesses, those involved hope to see their popularity rise. They're the first of their kind in Canada, according to the society.

“I have had some people say to me, “Ah, only in Vancouver,” Janes said. “I’d like to think that this is not the only place that this could happen. I’d like to see this idea go all over the place.”

A report published last year by the B.C. Centre of Excellence in HIV/AIDS found that from 1996 to 2011, fewer people in the community were using drugs and injecting drugs, and attributed the drop to harm reduction methods.

The study also found that illicit drugs continue to be easily available on the streets of Vancouver, despite policing enforcement efforts.