Burnaby farmers pleased to meat you with CSA program 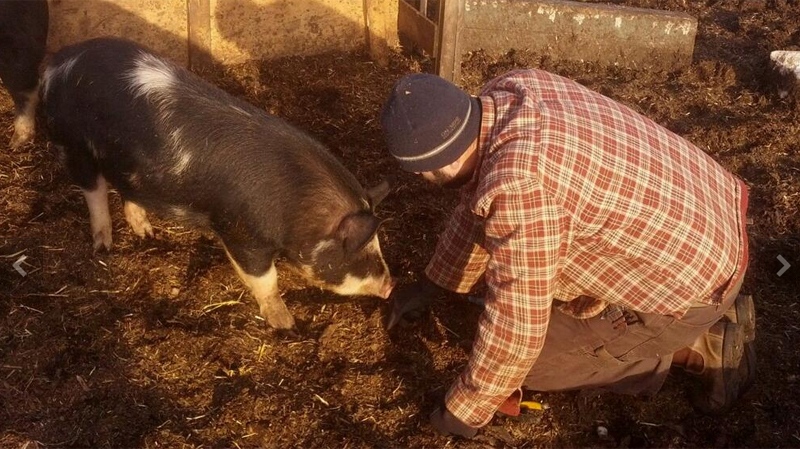 Ludo Ferrari, co-owner of Urban Digs Farm in Burnaby, takes the idea of getting to know your food to a new level. (Twitter)

A local farm has identified consumer wishes of online shopping convenience and the Buy Local movement and is trying to meet demands — with meat.

Putting their own spin on the popular Community Supported Agriculture subscription model of weekly vegetables and produce delivered to your door, Burnaby’s Urban Digs Farm has created Beasty Boxes, a weekly subscription to various sustainable meat options for the conscientious carnivore.

“The CSA Harvest Boxes of vegetables have been so popular, we wanted to offer a nose to tail sustainable meat solution for people as well,” farmer Julia Smith said. “We source locally produced meat from small scale farms and try to use the whole animal.”

“I sometimes joke that I think I have the only carbon positive pigs, because they are fed using sustainable practices and eat food that would otherwise be going to the landfill.”

The Community Supported Agriculture model has been big among the Buy Local food movement, giving consumers an opportunity to subscribe for a set period of time and purchase a share of the farm’s produce.

The model gives the farms the confidence to plan ahead and takes some of the pressure off of taking on all the risk for a good growing season themselves.

The Beasty Box gives customers a weekly offering of enough meat for two people for two meals. Currently the farm has 60 subscribers, which Smith says is their maximum.

“We’re trying to encourage people to eat less meat as well,” Smith said. “We don’t offer it during the summer because that’s the time when more vegetables are available.”

“I’m hopeful more people will follow this model and offer this type of program.”

Smith, who has a background in web development, said carrying out most of the ordering and outreach online also gives consumers what they are looking for — convenience.

According to data collected last year by Ipso Reid, the average Canadian increased their online spending from $639 in 2012 to $899 in 2013.

At the same time, the Buy Local movement continues to gain traction, with more consumers looking to support small businesses.

A report released last fall by the Business Development Bank of Canada identified close to two-thirds of Canadians had made an effort to buy local in the past year.

Smith said her farm has partnered with nine other local producers to create a co-op for the CSA Harvest Box program, and working together allows for more time to be spent growing.

“The Beasty Box program keeps two local butchers working and we are able to support other local farms by paying a good price for the meat,” Smith said.

With an eye on educating people about how farming practices can contribute to the health of the community, Urban Digs Farm is hosting an upcoming discussion panel, dinner and film screening Feb. 22 called Mindful Meat: Sustainable Tables and Ethical Eats at The River Market in New Westminster.