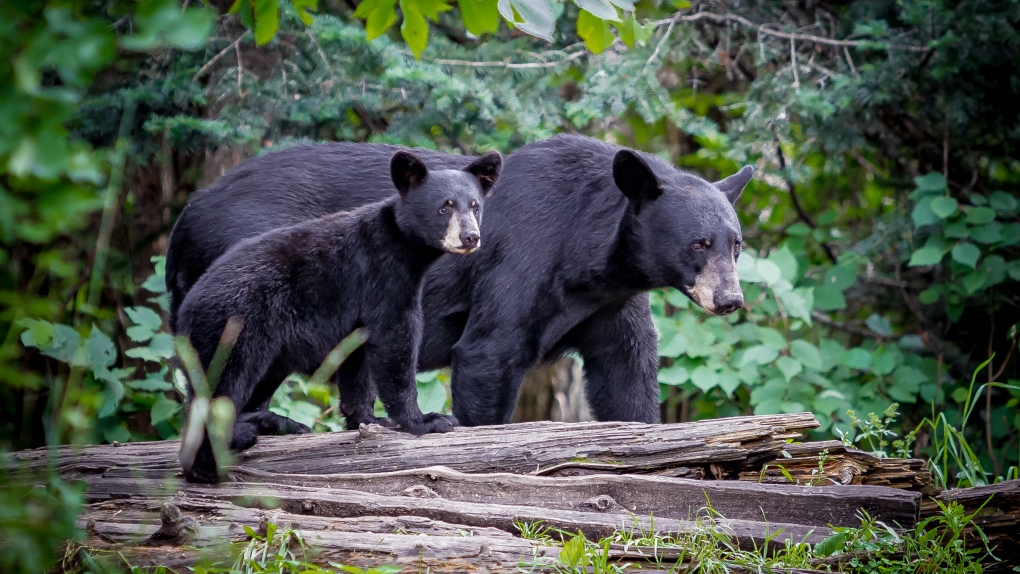 A black bear and a cub are seen in this undated stock image. (Shutterstock)

Dawson Creek RCMP said they were called just before 7 p.m. Monday about a bear attack on the Bear Mountain Cross Country Ski Club trails. Mounties were told two women, one around the age of 30 and the other around the age of 48, were unaccounted for.

About an hour later, well after sunset, officers found the victims "critically injured lying in the bush with a large boar black bear lingering nearby."

"Several attempts were made to scare the bear off, however it remained and would not leave the vicinity of the victims," Mounties said in a news release Tuesday.

"RCMP officers believed the bear to be guarding the victims, so discharged a rifle, striking the bear and killing it."

Police said the two victims were airlifted out of the area with life-threatening injuries. Both are still alive "at this time," Mounties said in their update Tuesday.

B.C. Conservation Officer Service told CTV News Vancouver it was a family of four that was out for a hike when the bear charged at them. The agency said a teenage boy was also injured during the incident and was taken to a local hospital.

"Conservation officers remain at the attack site today as the investigation continues," BCCOS said in a statement, adding the area is closed to the public. "No additional bears were located during a sweep of the area. A necropsy will be conducted on the bear, an adult male, later today."

The incident in Dawson Creek wasn't the only bear attack reported in recent days. On Monday, the BCCOS shared a statement about another incident, saying an encounter happened on Friday while a woman was walking her two off-leash dogs near Forest Grove in 100 Mile House.

"The dogs ran ahead into the bush. When they came back out running towards the owner, a black bear was in pursuit," BCCOS said in its statement.

"The bear swatted and bit the woman before stopping its attack. The woman was able to leave the area and received medical treatment in hospital for bruising, scratches and minor puncture wounds."

Conservation officers went to the area to collect evidence and interview the victim. The agency concluded its investigation Monday, saying the attack appeared to be defensive and involved a sow and her cub. As a result, conservation officers won't attempt to capture or kill the bear involved.

"Warning signs have been posted in the area and nearby residents have been informed of the incident," BCCOS' statement said.

Conservation officers say those in bear country should take precautions when adventuring outdoors like making noise, staying in groups and carrying bear spray.

In the first eight months of the year, conservation officers have received more than 16,300 calls about black bears, provincial data shows. Officers attended about nine per cent of those calls in person.

From January through August, 288 bears were killed by conservation officers. Four were relocated.