B.C. health-care workers respond to 'slap in the face' protests outside hospitals

B.C. health-care workers respond to 'slap in the face' protests outside hospitals 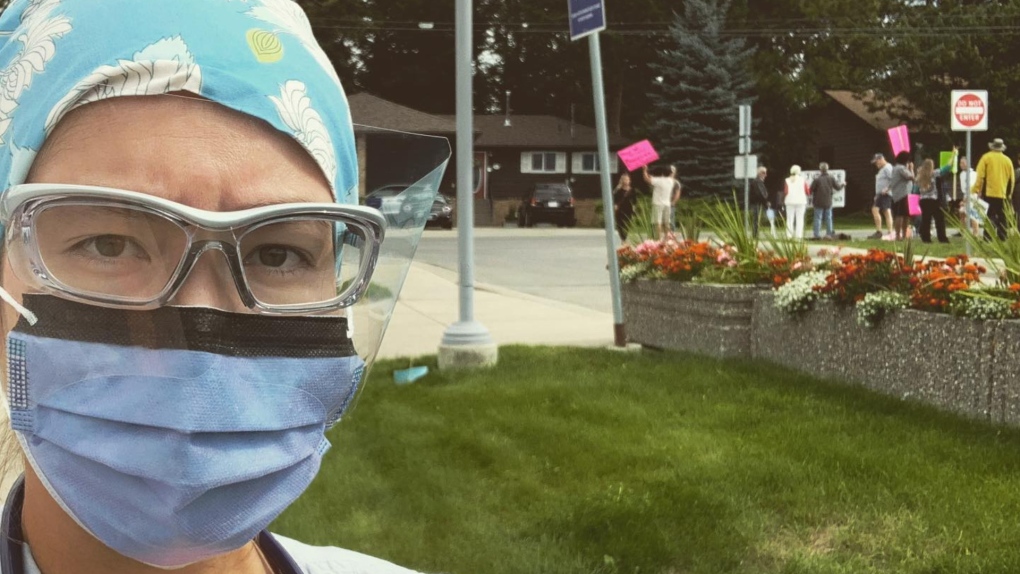 With COVID-19 patients once again filling up B.C.'s intensive care units, the workers trying to keep them alive are enraged that protesters crowded outside hospitals this week in opposition to an incoming vaccine passport system.

Reaction to the protests, promoted as a “Health Freedom” demonstrations purportedly supporting health-care workers who don’t want to be vaccinated, has been swift and scathing, in part because attendees obstructed hospital access.

Frontline workers have been flooding social media with their responses, with many thousands of people reacting and thanking them for their efforts to care for patients while putting up with what the health-care professionals described as an offensive and disrespectful display at Vancouver General Hospital, Kelowna General Hospital and Victoria’s Royal Jubilee Hospital.

View from the OR today. The same OR that is running at <60% capacity for the 3rd week in a row due to an overwhelming # of COVID+ unvaxxed hospitalizations. I’ve never been so disappointed in my community. pic.twitter.com/bAfn3iunv2

“What a disgusting, misguided display of disrespect and ignorance,” wrote Kelowna General worker Jessica-Leigh Sandberg, in a post that went viral on Facebook.

“You have made us feel deeply disrespected,” wrote Dr. Kari Way, describing nurses in tears, ambulances unable to access the emergency department and loud car horns distressing elderly and delirious patients. “Our nurses and staff are stellar - and they are burning out. Morale is low. Tensions are high. Beds are full.”

Several health-care workers pointed out they began their careers with the very clear requirement they’d need vaccinations to do their jobs, and pointed out no one would be refused medical treatment for being unvaccinated under the new vaccine health pass.

“The place for that is outside the legislative buildings,” wrote Vancouver nurse Shana Aguilar on Instagram. “They are the ones making policies. Health-care professionals are just trying to care for the ill and injured, including COVID patients.”

With Wednesday's demonstrations blocking traffic, including ambulances and sick patients, in the middle of the day, health-care workers watched in shock and disgust.

"It feels like a slap in the face -- the flagrant disregard for public safety and the reality of what the repercussions of this kind of activity by people who are not vaccinated and aren’t taking the opinions of the health-care providers," said psychiatric nurse Christina Gower in an interview with CTV News.

“Our morale is low, we've been working short -- we were short before COVID and now it's here and we're experiencing moral despair every single shift.”

The crisis in nursing is emerging as a major factor in handling the fourth wave, and was a key point raised by a Royal Columbian Hospital emergency doctor voicing her dismay at the disrespect felt by her colleagues.

In a Facebook video, Dr. Kelly Kasteel pointed out they’re down 30 to 40 per cent of the nurses they need each shift in the wake of burnout and exhaustion.

"People are crying and sad now because they can't go to a restaurant if they're not vaccinated," said Kasteel, incredulous at the entitlement only a year after health-care workers were terrified of dying from COVID while treating patients, as happened in other countries. “I would've taken the shot in my eyeball in March of 2020 because it's the only thing that’s kept the health-care providers alive at this stage.”

She revealed in recent days she saw a 37-year-old patient critically ill with COVID-19, and unvaccinated.

“His oxygen was so low it was not compatible with life,” she recalled. “And he said, 'Well I was waiting for FDA approval because I need more proof.'"

Marching from VGH to Vancouver city hall and yelling, “Freedom, freedom!” along with slogans such as, “My body, my choice!” the crowd heard from speakers talking about standing their ground against what they feel are draconian and unfair public health orders. Vancouver police estimate 5,000 demonstrators participated.

In Victoria, the sentiment was similar, with calls for “united non-compliance."

On Facebook, a group called “BC Businesses Against Health Pass” with more than 100,000 members and full of posts criticizing the policy applauded those who demonstrated peacefully.

“To the protesters, who are today at the Vancouver General Hospital and other locations across this vast country exercising their right to Peacefully Assemble..........we salute you,” wrote one of the group’s administrators, Sean Cahill. “We again, DO NOT condone acts of physical or verbal abuse. Also please refrain from blocking traffic as that is against the law.”

Gower expects some of the very people who voiced anti-vaccine or anti-public health order opinions outside B.C. hospitals will end up back there soon enough.