B.C. drug lab could have produced enough fentanyl to kill everyone in Canada 4 times

B.C. drug lab could have produced enough fentanyl to kill everyone in Canada 4 times 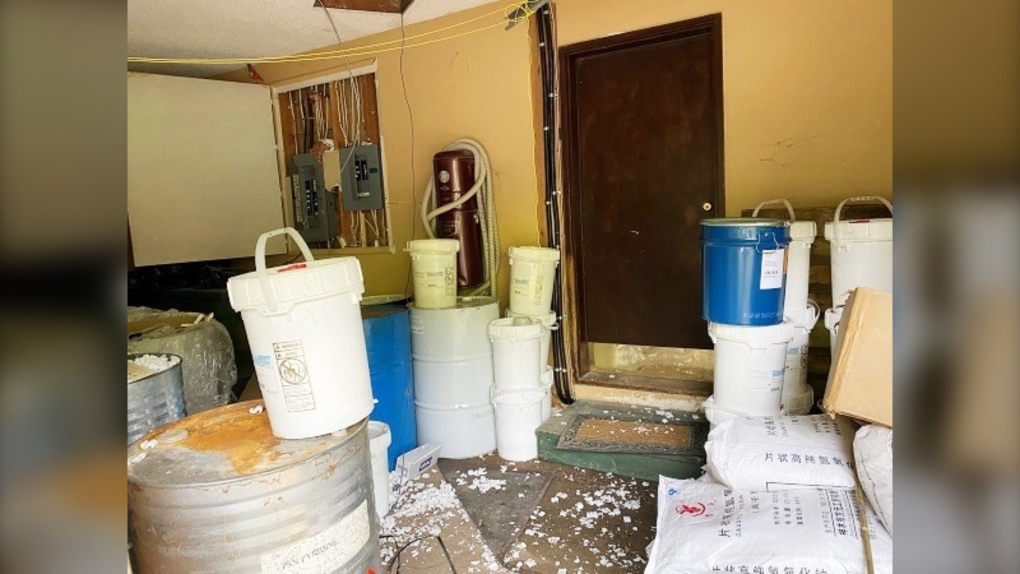 During a recent bust at a drug lab in B.C.'s Fraser Valley, RCMP officers say they found enough raw material to produce 160 million potentially fatal doses of fentanyl. (BC RCMP)

The amount of fentanyl necessary to cause a fatal overdose varies from person to person, but the generally accepted size of a potentially lethal dose is just two milligrams – about the size of a few grains of sugar.

During a recent bust at a drug lab in B.C.'s Fraser Valley, RCMP officers say they found enough raw material to produce 160 million doses of fentanyl that size.

The 320 kilograms of fentanyl that Mounties say the home lab could have produced would theoretically be enough to kill every single person in Canada four times over and still have enough of the drug to kill most of Ontario a fifth time.

The BC RCMP's Clandestine Laboratory Enforcement and Response team, which conducted the June 2 seizure, told CTV News the size of the bust is "typical" for its operations.

"The scale and quantity of illicit drugs and precursors seized in this case is consistent with most other takedown investigations," said a spokesperson in an email.

The BC RCMP's Federal Serious and Organized Crime (FSOC) unit said in a news release that the CLEAR team had located the "significant cache of chemicals used in synthetic drug production" during a search of a home on Extrom Road.

Among the items seized were 160 litres of propionyl chloride – which RCMP described as a "Class A precursor" – and more than 2,000 litres of "industrial solvents commonly used in the illicit production of synthetic drugs," police said.

Investigators also found "other signs that a clandestine laboratory was in the early stages of being constructed," according to police.

No arrests were made during the search, Mounties said, adding that charges have not yet been laid in the investigation.

"The recovery of these precursors represents a significant disruption to the illicit synthetic drug market," said Supt. Bert Ferreira, the officer in charge of the BC RCMP FSOC Border Integrity Program, in the news release.

"More importantly, this seizure prevents additional deadly drugs from harming our communities that continue to suffer from the opioid crisis."

Last year saw the most illicit drug overdose deaths ever recorded in B.C., and the first four months of 2022 put the province on pace to eclipse the record again.

There were 722 overdose deaths from January to April, an average of 180.5 per month or more than six per day.

Fentanyl was recorded in the systems of 83 per cent of those who died of overdoses in B.C. during the period.