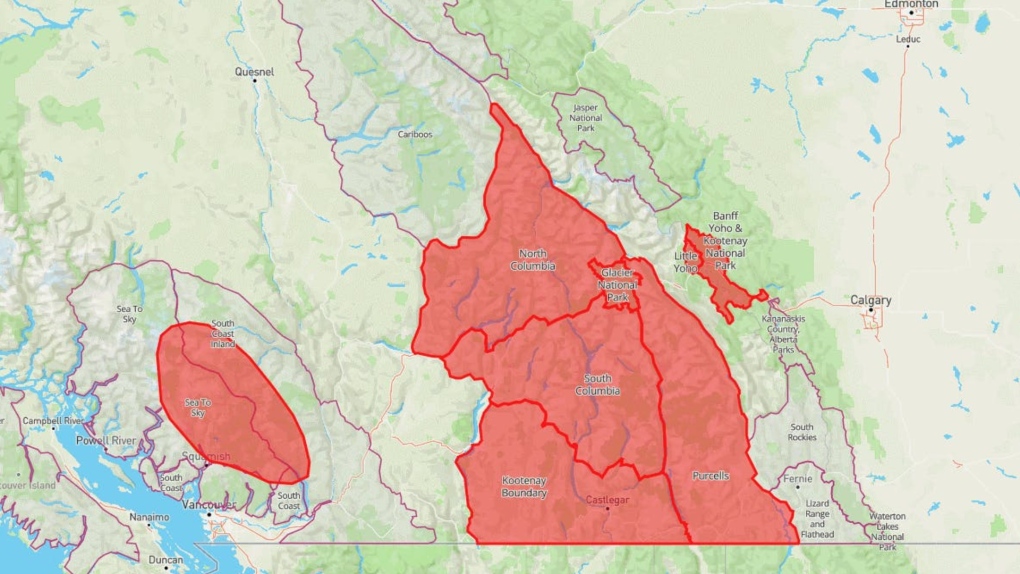 A special avalanche warning has been posted for recreational backcountry users in several regions of B.C. and Alberta as warm temperatures make the snowpack unstable. (Avalanche Canada)
Revelstoke, B.C. -

A special avalanche warning has been posted for recreational backcountry users in several regions of B.C. and Alberta as warm temperatures make the snowpack unstable.

Avalanche Canada and Parks Canada have issued the advisory to take effect immediately and last through to Monday.

The warning applies to the North and South Columbias, Purcells, Kootenay Boundary, and Glacier, Banff, Yoho and Kootenay National Parks.

It also applies to B.C.'s Sea-to-Sky region and South Coast Inland area from Squamish to Pemberton.

James Floyer, the forecasting program supervisor for Avalanche Canada, says there are weak layers in the mountain snowpack across most of southern B.C. and western Alberta.

He says the combination of the snowpack structure, sunshine and higher temperatures will make natural and human-triggered avalanches much more likely.

The forecasting agency says there have been several close calls reported recently including one last weekend in southeastern B.C. where a large avalanche buried all but the head of a snowmobiler and his companions were able to dig him out alive.

“There is a lot of uncertainty with these weak layers,” says Floyer. “While we have targeted an area where we think there is a higher risk of triggering these deep weak layers, we also urge backcountry users in adjacent regions to exercise caution during this warming period.”

This report by The Canadian Press was first published Jan. 20, 2022.

With Quebec confirming an additional 10 cases of monkeypox identified in the province, the Public Health Agency of Canada says they are monitoring a total of 15 cases across the country.

Prime Minister Justin Trudeau says his 'heart breaks' for those impacted by the 'horrific' shooting at an elementary school in Texas that killed 21 people on Tuesday.

Crews are working to restore power to more than 150,000 Ontario customers who are still without hydro after a deadly storm swept through the province on Saturday.

Johnny Depp was back on the witness stand Wednesday in his libel suit against ex-wife Amber Heard.

British Prime Minister Boris Johnson and other senior officials bear responsibility for a culture of rule-breaking that resulted in several parties that breached the U.K.'s COVID-19 lockdown rules, a report into the events said Wednesday.

Golden State Warriors coach Steve Kerr refused to talk about basketball at a pre-game news conference on Tuesday and instead called for stricter gun control after the killing of at least 18 children and an adult in a Texas school shooting.