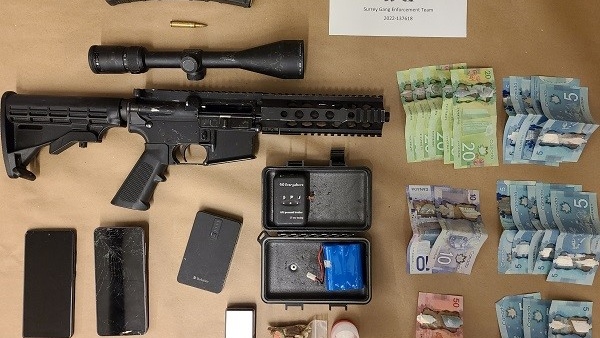 An investigation into the ongoing gang activity in Surrey has led to the seizure of an assault rifle, armour piercing bullets and drugs, according to Mounties.

An investigation into the ongoing gang activity in Surrey has led to the seizure of an assault rifle, armour piercing bullets and drugs, according to Mounties.

In a news release Thursday, Surrey RCMP said officers from the city's gang enforcement team and the Combined Forces Special Enforcement Unit of B.C. were conducting patrols in the area of 104 Avenue and King George Boulevard on Sept. 10.

At approximately 9:30 p.m., officers located a man they said was acting suspiciously and attempted to evade police.

Upon further investigation, Mounties arrested the man, who was allegedly found to be in possession of a bag containing the following items:

Bourque remains in custody, pending his next court appearance.

"This is just one example of the work our gang enforcement teams here in Surrey and across the province through CFSEU-BC are doing on a daily basis," said Const. Sarbjit K. Sangha in the release.

"Our goal is to deter further violence associated to drugs and crime, by taking prohibited weapons off our streets."