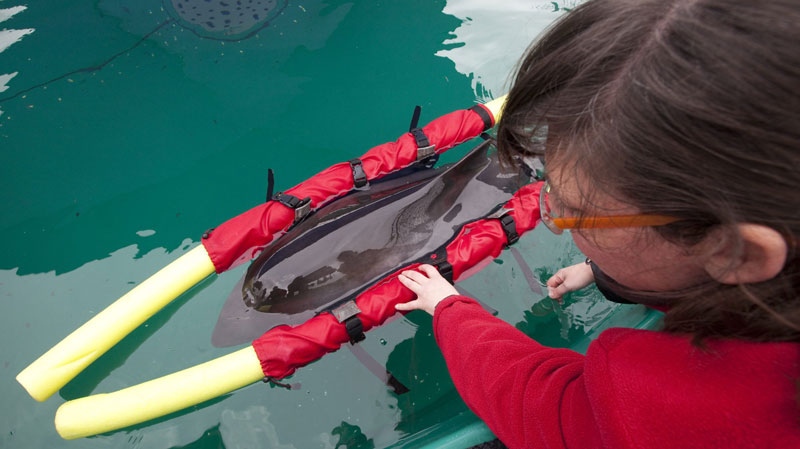 A wild porpoise that was rescued by Vancouver Aquarium staff likely died of a disease that causes water to build up in the brain.

The animal named Siyay stopped breathing around 5 a.m. Sunday, after more than a week of severe health complications.

Siyay had undergone several bouts of emergency drug therapy since being saved from Salt Spring Island off of B.C.'s Gulf Coast 18 days earlier.

Veterinarian Martin Haulena said initial necropsy results from the Marine Mammal Rescue Centre suggest the animal suffered from hydrocephalus, a buildup of water that causes swelling in the brain.

Haulena said the mammal was emaciated and appeared to be suffering from gastric ulcers, parasites and a lungworm-type disease.

Marine scientists at the facility say this is the first case of the disease they've encountered in the hundreds of sea creatures they've examined in recent years.

The disease is usually diagnosed in humans through an MRI scan, but the porpoise wasn't in stable enough condition to have the test performed.

Scientists are now trying to figure out how the disease, which is normally associated with land animals, struck the three-year-old porpoise.

"How did that animal get introduced to that parasite? Is it agricultural runoff? Is it the way we treat sewage? These are important questions," Haulena said.

Haulena praised the work of staff on their tireless efforts. He said most rescued mammals don't live longer than 48 hours.

"It's been a lot of sleepless nights for a lot of people," he said. "Of course we wanted things to work out differently but we learned a lot."