Internal documents obtained by CTV News Vancouver paint a portrait of dire circumstances for one of B.C.'s busiest hospitals, as health-care workers say other facilities are just as strained. 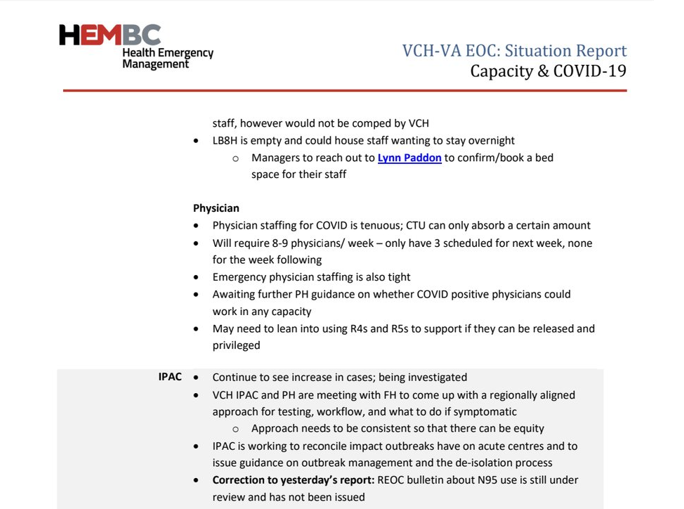 Dated Wednesday, the memo goes on to say that the facility had a “noticeable increase in COVID presentations in the last 48 hours” and was operating over 100 per cent capacity. It also warns physician staffing for COVID-19 “is tenuous.”

The hospital is developing a daily dashboard to monitor shortages in nurses and allied workers, according to the document.

It noted that there were only three physicians scheduled to work the VGH COVID ward for next week, when eight or nine are needed. None were slated for the following week.

Late Friday morning, some 2,000 doctors classified as “Vancouver Acute Physicians” received an urgent bulletin on behalf of the senior medical staff at the hospital, pleading with them to sign up for shifts.

“The COVID census today is 70 compared to 6 on Dec. 27, 2021. The majority of admissions have occurred in the past four days,” they wrote to the hospitalists.

“We need more help as soon as possible.”

The HEMBC analysis noted that with the doctor shortage, even in the emergency department, they were “awaiting further (public health) guidance on whether COVID-positive physicians could work in any capacity.”

CTV News asked provincial health officer Dr. Bonnie Henry whether the province was at that point, and she downplayed the staffing situation, reiterating comments she made on the matter last week.

“I’ve said this quite a few times, but I’ll say it again. We have health human resource planning in place right now that has been since the very beginning, we have principles that we use -- things like calling people back from vacation and time off, extending hours, having people work in different areas,” said Henry. “One of the last resorts, if we get to that point where it will compromise care for people, then we have a fitness for work protocol.”

Health Minister Adrian Dix said allowing health-care workers who were COVID-positive to stay on the job, as has been implemented in Quebec, was “something that might be envisioned at some point in the future.” He insisted it wasn’t necessary yet.

"This is why we made the decision a number of weeks ago that as of Jan. 4 we were going to delay non-urgent scheduled surgeries," said Dix. “It comes at a price, but it's one of the ways we have to reduce the number of people in hospital and allows us to use our staff most effectively to deal with the circumstances of the Omicron variant of concern.”

Sources tell CTV News that Surrey Memorial Hospital is in even worse shape than VGH, and earlier this week an intensivist and the BC Nurses Union described Nanaimo Regional General Hospital as in crisis mode, with 30 per cent of nurses missing while the hospital operated at 109 per cent capacity.

Frontline health-care workers are expressing frustration, much like they did in earlier waves of the pandemic, that the province’s top health officials aren’t adequately expressing to the public just how frail and tenuous the health-care system is right now. 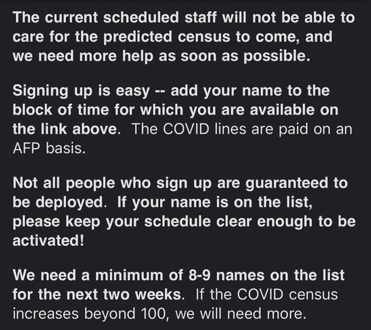 Late Friday morning, some 2,000 doctors classified as “Vancouver Acute Physicians” received an urgent bulletin on behalf of the senior medical staff at the hospital, pleading with them to sign up for shifts.

Eleven newborn babies have died after a fire that broke out in the neonatal department at the Mame Abdou Aziz Sy Dabakh Hospital in the western Senegalese city of Tivaouane, said the country's president Macky Sall on Thursday.