A pregnant mother of two from Fort St. John, B.C., who was airlifted to hospital for COVID-19 treatment on Thanksgiving is now on a ventilator, clinging to life some 1,200 kilometres from home.

Krystal St. Pierre is six months into her pregnancy, and unvaccinated. Her husband Dwayne Binette, who is also unvaccinated and contracted the virus as well, is telling their story to try to convince others not to make the same mistake.

“Back then we were against vaccination, we kind of didn’t want to do it and have something harmful happen. We didn’t understand if it was safe or not for her being pregnant,” said the oil patch worker, who added, like many of their friends and neighbours in the north, they were “dug in."

After their concerns were addressed at a prenatal appointment in early October, the couple was talking about booking vaccination appointments. But then they both got sick.

“By Monday the 11th, Thanksgiving, she could barely move around, her breathing was laboured so we decided you’d better go to the hospital,” said Binette.

The 39-year-old was airlifted to Victoria General Hospital that night, and deteriorated quickly. St. Pierre’s pregnancy complicated her treatment options.

“They tried a technique called prone position, where they flipped her upside down and supported her on her shoulders and her hips and let the belly come off the lungs, let the child give her more room inside. And it had never been done in B.C. before,” said Binette.

But it didn’t work. Doctors were left with the last resort for critically ill COVID pateints: an ECMO machine that does the work of the lungs. St. Pierre is also on a ventilator, in a medically induced coma. She’s been transferred to Royal Columbian Hospital in New Westminster, where her husband was told the vast majority of people in her condition don’t survive.

“For me, it was upsetting to find out your wife only has a 10 per cent chance of surviving,” said Binette through tears. “It’s pretty hard to deal with.”

His distress is compounded by regret.

“I am 100 per cent confident that had we been vaccinated a couple of months ago, we would not be in this position. That Krystal’s life would not in jeopardy right now,” he said.

Binette is now urging the vaccine hesitant, especially those in northern B.C., to speak to medical professionals and get the shot. 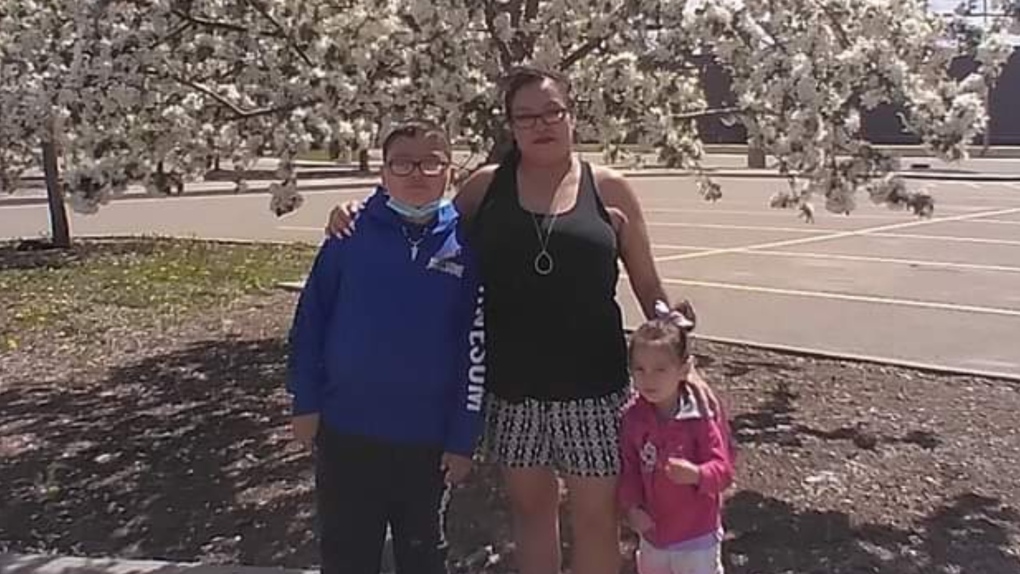 “People should look at it as, even though you may not understand it, you would do anything you can to save your family members life in any other circumstance. So why wouldn’t you do it now?” he said.

Peace River South MLA Mike Bernier, who’s been a fierce advocate of vaccination in the north, is glad Binette is speaking out.

“It’s got to be just gut wrenching. And for Dwayne to be able to have the strength to tell this story and maybe convince one more person to be vaccinated, good on him,” said Bernier.

While St. Pierre is in the ICU at Royal Columbian, her husband and two children, who are in quarantine in Fort St. John, can only see her on FaceTime.

“Even though Krystal is in a coma and she can’t respond, we can still talk to her and tell her we miss her and we love her,” he said.

Bernier said their story of separation is not unique.

“We have had over 60 people medevaced out of the north to various into different parts of province where they can find a bed. And almost every case the loved ones are not able to be with them,” Bernier said. “Lucky, some are pulling though.”

St. Pierre’s best chance may be delivering her baby girl early. Now that she is 28 weeks pregnant and the baby has a good chance of surviving the premature birth, a C-section is being considered.

“It would actually increase Krystal’s odds of survival, it would be better for her. So I leave it in the doctors hands, they are the professionals,” said Binette, who is trying to remain optimistic.

“I just can’t wait to see my baby girl and have my wife back.”

Oct. 23: This story has been updated from a previous version to correct the spelling of a name.