Children under age 12 now make up about 20 per cent of British Columbia's COVID-19 cases, health officials revealed Tuesday while presenting their plans for vaccinating kids as young as five.

There were 568 confirmed cases involving infants, toddlers and children up to age 11 from Nov. 16 to 22, according to new data from the B.C. Centre for Disease Control. The government announced 2,679 cases in total over that seven-day period.

Children between the ages of five and 11, who just recently become eligible for the Pfizer-BioNTech vaccine, accounted for 457 of those.

That age group has been vastly overrepresented in the province's COVID-19 case numbers since transmission exploded near the start of the school year – while children under 12 have made up 20 per cent of recent cases, they represent just 10 per cent of B.C.'s population.

But provincial health officer Dr. Bonnie Henry noted Tuesday that transmission has been decreasing across the board in recent weeks, including among those age five to 11. 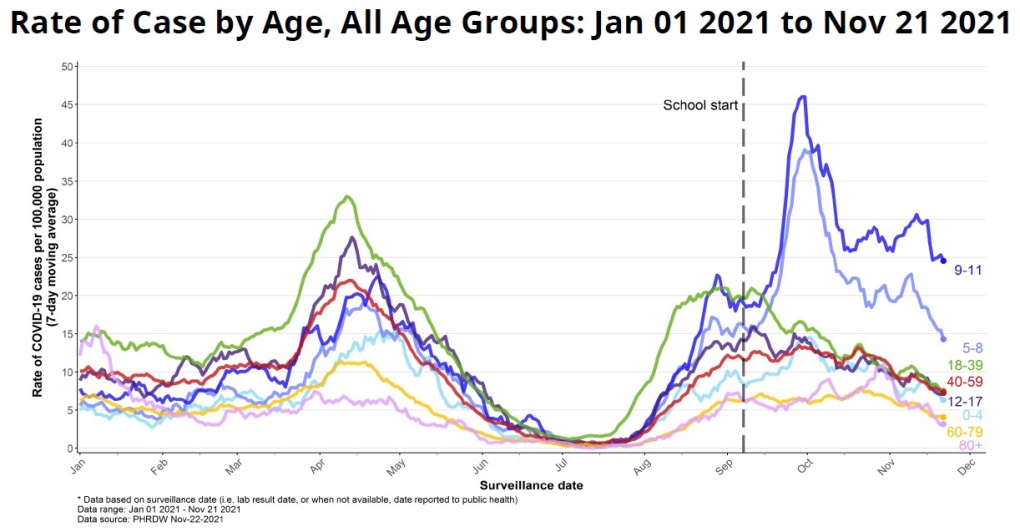 She also noted there were no COVID-19 hospitalizations in that age group from Nov. 16 to 22, and there have been no COVID-19 deaths among B.C.'s school-aged children so far.

"I think that's really important for us to remember," Henry said. "This virus, thankfully, does not cause as severe disease in most children."

Since the start of the pandemic, 183 children under the age of 12 have been hospitalized in B.C., and 17 have ended up in critical care. The deaths of one infant and one toddler, both recorded earlier this year, have been blamed on COVID-19 as well.

There have been 19 cases of multisystem inflammatory syndrome in children, or MIS-C, each of which required hospitalization, and Henry noted that kids can also suffer long-haul coronavirus infections.

"We know that it's important to protect children individually, because we can't always tell who's going to get the severe disease. But it's also important to allow children and families to get over some of the very severe disruptions we've had from the pandemic in our lives." 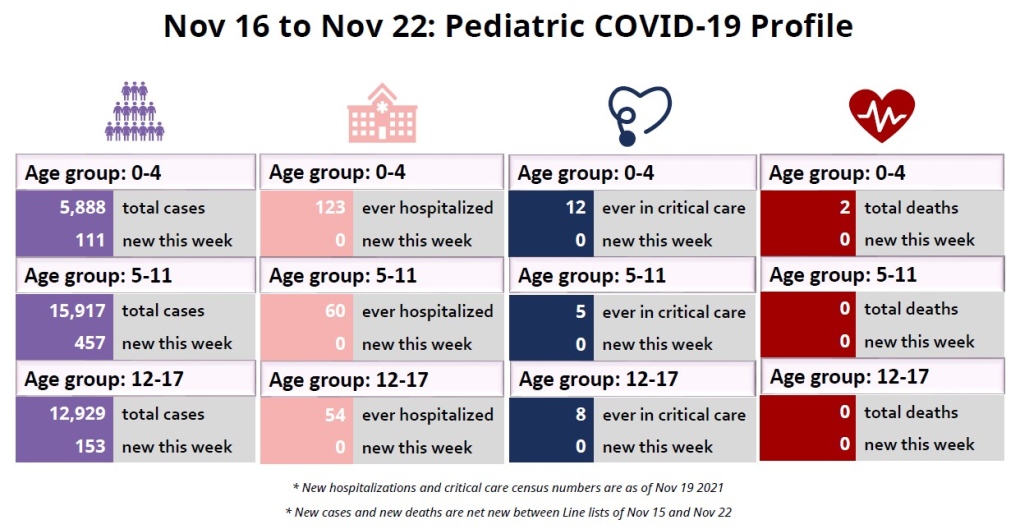 Health officials also presented updated data on COVID-19 cases in schools, which has led to much anxiety among some parents and teachers this year, particularly given the rise of the more contagious Delta variant.

There have been 2,975 exposure notifications across 835 schools since the start of the fall semester, more commonly in parts of the province with increased transmission and lower vaccination, such as the Interior and North.

Those notifications are triggered whenever someone enters a school while infected, whether or not it results in any additional cases.

Those were linked to 382 clusters – defined as incidents involving two or more cases and transmission that is believed to have occurred on school grounds – resulting in 1,187 infections.

About 12 per cent of schools experienced a cluster from the start of the school year to Nov. 6, Henry said.

"So in 88 per cent of our schools across this province, we have not had any transmission events. I think that's good news," she added. "It tells us what's happening in the schools is working to support children."

The median number of cases associated with clusters has increased this school year, going to three from two, which officials also blamed on the Delta variant.

But a new BCCDC investigation into B.C.'s school clusters found "most of the transmission in school-aged children happens in the community or at home," Henry said.

Canada's first doses of COVID-19 vaccine developed specifically for children between the ages of five and 11 recently arrived in the country, and B.C. announced Tuesday that invitations to book appointments will be going out to families next week.

There are about 360,000 children in that age group, and 91,000 have already been registered for their shot, according to health officials.

Unlike previous vaccine rollouts, appointments for children ages five to 11 are mandatory.

The dose they will be receiving is smaller – just 10 milligrams, compared to 30 milligrams for adults – which was determined to build just as strong an immune response in that age group. Henry noted it's not because of their comparably small size, but "because our immune systems when we're younger are just that much more responsive."

The U.S. National Archives and Records Administration has provided a House committee with more than 700 pages of presidential documents after the Supreme Court rejected a bid by former U.S. President Donald Trump to block the release.

A new study has found that people who received the Moderna COVID-19 mRNA vaccine are less likely to experience breakthrough infections and hospitalization compared to those who received the Pfizer-BioNTech mRNA shot.

A 75-year-old man is among multiple people in Ontario who say they were accidentally given the equivalent of six doses of the COVID-19 vaccine while getting their booster shot.

Alberta RCMP say they are investigating after a child was found wandering on a highway near a town northeast of Edmonton earlier this week.